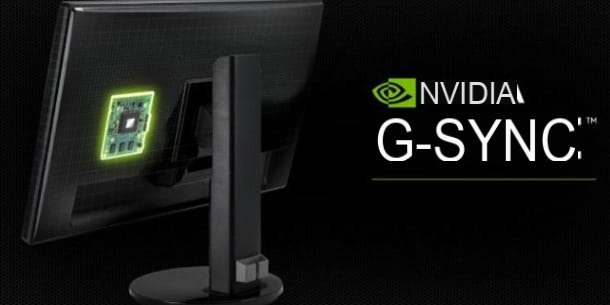 You've often heard of G-SYNC but so far the question has appeared to you as a rather nebulous and incomprehensible concept? No problem, I will try to explain to you what this technology consists of in the simplest and clearest way possible.

Following various processing steps, the graphics processor installed on a computer produces a certain amount of frames per second (often abbreviated to FPS and also known as framerate) that are “sent” and displayed on the screen connected to the computer.

In some cases, the framerate generated by dedicated graphics cards (the best performing ones) is higher than the maximum refresh rate supported by the screen in use (i.e. the number of times the screen image can be refreshed). In this case, the visual phenomenon of the tearing, that is, the images displayed on the screen appear "separated" in half, horizontally or vertically with the two halves not aligned with each other.

In other cases, phenomena of stuttering: this term refers to all the micro interruptions (lasting a few fractions of a second) in the flow of images displayed on the screen. In short, by now you will have understood: both problems originate from the fact that the streams of images produced by the graphics processor and "reproduced" by the screen are not synchronized with each other.

NVIDIA's G-SYNC technology was designed to prevent these defects from occurring. Basically, some monitors on the market have a integrated module which makes it possible to synchronize the flow of images produced by NVIDIA graphics cards and the one reproduced on the monitor. To check the (constantly updated) list of G-SYNC monitors, just open the appropriate support page on the NVIDIA site with any browser.

It goes without saying, therefore, that the function can only be activated on these monitors (with some exceptions which I will tell you about shortly). In the list compiled by NVIDIA, you will notice that some monitors are indicated with the words G-SYNC, others with that G-SYNC ULTIMATE and still others with the wording G-SYNC COMPATIBLE. You should know that for all three categories of monitors it is still possible to enable the G-SYNC functionality in order to completely avoid any tearing or stuttering problems.

The differences between the three classifications are related to the media format DisplayHDR 1000 (1000 nits of brightness), ultra-low latency, wide color gamut and multi-zone backlight. These features are unique to monitors G-SYNC ULTIMATE.

The monitors G-SYNC (such as G-SYNC ULTIMATE) are characterized by very low input lag (the term refers to the time lag between the command given with an input device, such as a mouse or keyboard, and the output of the command executed on the screen), ultra low motion blur (the image does not appear blurry even when it is particularly moved), factory color calibration and support for G-SYNC technology in both window and full screen mode.

The monitors G-SYNC COMPATIBLE support technology FreeSync from AMD (the latter was designed to avoid the same tearing and stuttering problems and is supported by AMD graphics cards). Despite this, these monitors have been tested by NVIDIA and obtained the G-SYNC COMPATIBLE certification from it.


How do you say? Have you looked at the list of the link I proposed above and your monitor is not one of those mentioned? Don't despair: some FreeSync monitors, even if not officially certified by NVIDIA, are still compatible with the technology of the latter. In this regard, check the list of FreeSync monitors compiled by AMD or, alternatively, make sure that on the sales package of your device or in its instruction booklet it says the words FreeSync.

Once you have done these checks, follow the steps that I will give you in the next chapter to find out if your monitor actually supports the G-SYNC option (the option, in these cases, can be activated but some graphics problems may occur sporadically such as a “flickering” or flickering of the image).

Regarding the requirements for activating the aforementioned option, I must inform you that not all graphics cards equipped with an NVIDIA processor are compatible with G-SYNC. The cards GeForce starting from those of 650 series (the "base" model is the GeForce GTX 650 Ti with architecture Kepler) support the technology in question. However, only those from the series 1050 (with architecture Pascal) allow you to enable G-SYNC on FreeSync monitors as well.

If you don't know which graphics card is "equipped" on your computer, please see my tutorial on how to control the GPU. In order for everything to work properly you must also have updated the drivers of your card to the latest version available on a computer on which it is installed Windows 7 or a later version of the Microsoft operating system.

Finally, the last fundamental and essential requirement to enable G-SYNC is to have connected the graphics card to the monitor with a cable DisplayPort 1.2 (or a later version). The cables of this kind, more often than not, are supplied with the monitors or with the graphics cards themselves (for more details see this tutorial). If you do not have these cables, you can easily buy one from the major electronics chains (prices generally vary from 6 ai 15 € approximately, depending on the length, the maximum standard resolution and refresh rate supported).

To enable G-SYNC you will need to directly insert the connector located at one end of the DisplayPort cable into the appropriate input on the back of the graphics card and insert the other end into the input on the monitor you intend to connect. All clear? Optimal! Then let's proceed with the next steps of this tutorial on how to activate G-SYNC. 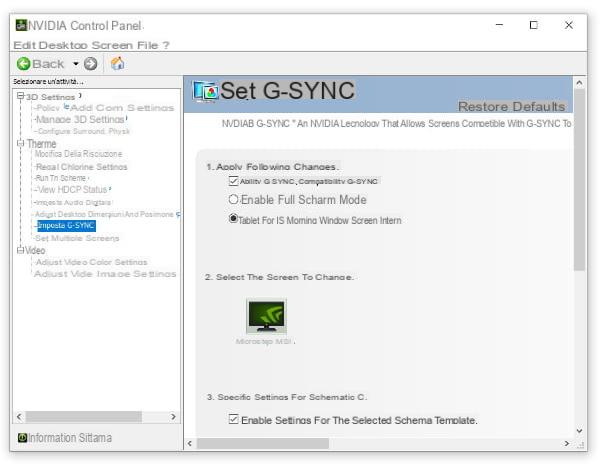 Once you've checked the conditions I mentioned earlier, you're ready to enable G-SYNC. The procedure itself is really straightforward. You should also know that the latter does not change: whether you have connected a "native" or "non-native" G-SYNC monitor to your graphics card, the steps to be taken are always the same.

In the window that opens, click on the entry Imposta G-SYNC in the list on the left. At this point, check the box Enable G-SYNC, G-SYNC compatibility (if necessary). That's all! You have just activated the above function for your monitor. Make sure, however, that your voice is also on Ability for window and full screen mode (if not, click on the item itself to enable it).

If you have connected more than one monitor to your PC, click onicon which has the name of the one on which you want to activate G-SYNC and then click on the box next to the item Enable the settings for the selected display template. If, at a later time, you want to disable the function, just press the entry box again Enable G-SYNC, G-SYNC compatibility, to remove the check mark.

If you don't see the G-SYNC option in the NVIDIA Control Panel and you're using a monitor FreeSync, make sure that the latter feature is also enabled (usually by default). On monitors that have this option, it can be activated directly with i keys placed at the bottom, on the monitor panel itself, using the integrated menu.

The way the latter is structured and the related items vary depending on your reference model. In general, by accessing the menu for a called entry Image o Game you should find an option called FreeSync o Adaptive Sync, then proceed to activate this function.

If, for example, you use a monitor MSI, just go up Game> FreeSync and from here press the key OK, per confermare l'attivazione. 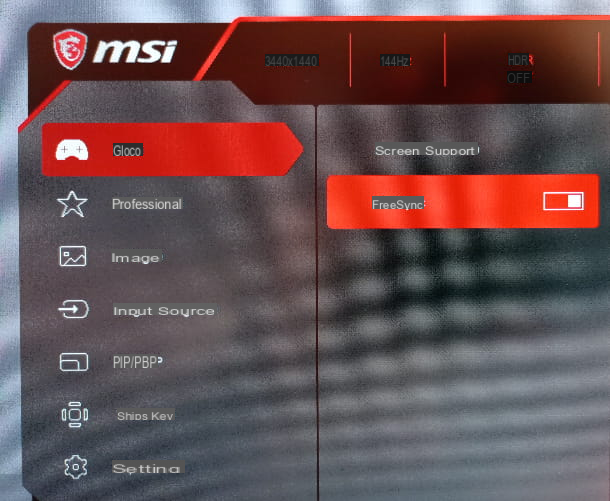 The same option can also be activated using the software made available by the manufacturers of the monitors. To download these programs, simply type in Google the name of your monitor and the relative brand. Among the first results of the search you should find the official web page of your device. Just open it and then click on a tab that might be called Software, Support o Utility and, from here, download the program to activate the FreeSync option.

If you use a monitor MSI, for example, you can enable the option in question with the convenient software Gaming OSD (which is part of the program MSI Commander Unit) made available by the same manufacturer for some monitors bearing its brand (you can download it by clicking on the button Download you find on this page). Once you have installed and started Gaming OSD, to activate the FreeSync option, all you have to do is press on button placed next to the item Adaptive Sync.

If, after following these preliminary steps, the G-SYNC option still does not appear in the NVIDIA Control Panel, make sure that you have updated your graphics card drivers to the latest available version and that you have connected the card directly to the monitor via cable DisplayPort (the link HDMI is not supported). Also, check that your card and monitor are among the ones I mentioned in the previous chapter.