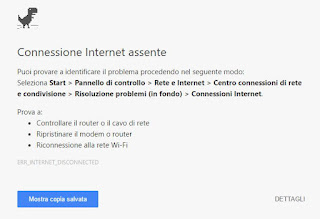 The mode "Offline"has always been present in browsers such as Mozilla Firefox and Internet Explorer to be able to open web pages already visited even if the computer was not connected to the internet.
This function is based on the creation of a cache copy of the websites visited in the past so that, even with the PC offline, these are loaded from the cache, in the latest version stored at the time of the last view.
Sometimes this function can be convenient, especially on laptops, to reread newspaper articles and blogs even with the PC offline on a plane, train or in situations where connecting is not possible.
The possibility of being able to open websites that have already been visited even without an internet connection it's possible, in Chrome, by activating a hidden option in that chrome: // flags menu full of other experimental features that may be part of versions of Chrome in the future.

To activate the offline mode of Chrome, on PC and Android, open a new Chrome tab by writing chrome: // flags in the address bar and press enter as if you were visiting a website.
The page that opens is very long and contains many functions that, if you do not know each other, it is better not to touch.
Then press the CTRL-F keys together to open a search box and find the option Show Saved Copy Button.
You will notice that this option works on Chrome for Windows, Mac, Linux, Chrome OS and also on Android and the same instructions apply to all.
Then click on the Default option and change it by putting on Enable Primary or Enable Secondary.
The difference is only in the position of the button which from this moment will appear in the error page of the no internet connection.
After the change, restart Chrome and open some web pages like this article and try the new functionality by disconnecting the wifi or disabling the internet connection.
A questo punto, sul computer o sullo smartphone Android senza internet, quando si apre un sito già visitato in passato come , compare la solita pagina di errore che segnala "connessione internet assente".
Unlike before, however, there is also a blue button with written "show saved copy", which allows you to open the latest version of that site as it was last viewed.

With this option enabled Chrome stores in its cache all images, HTML code, JavaScript codes, CSS style sheets and all other objects included in a web page so that it appears as much as possible the same as the original.
The only difference is that the content is not fresh and up to date and that the videos will not be able to work.
The cached copy is not created for sites with https connection such as Facebook, Google and many others.
Obviously, if you clear the Chrome cache (even using programs like Ccleaner) the copies of the saved web pages are also removed.