Windows 10 Creators Update arrives on April 11: what it is and what changes 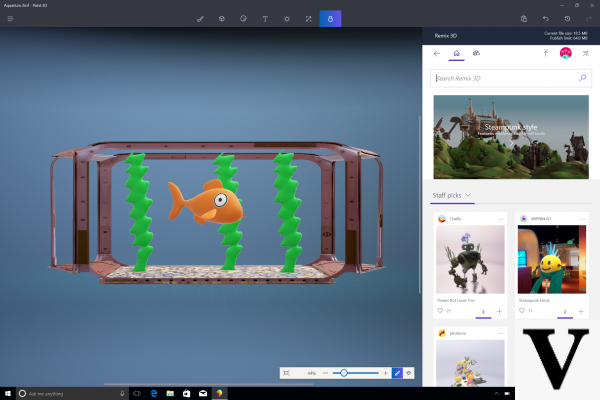 Windows 10 Creators Update will be officially released on April 11th. With a post on the company's official blog, Microsoft announces the release date of the new update of its latest operating system. Already in the previous months the rumor of a release by April, but the exact date was not known.

For the Redmond company this is a very important step: about a year after its release dell’Anniversary Update, Windows 10 integrates all the new features already shown during the event of presentation last October. With Creators Update, users will be able to take advantage of Beam, a new platform dedicated to video games where you can share games and show your challenges in live streaming, as already happens on Twitch. Furthermore, Creators Update takes a decisive step towards mixed reality, a real test for the future of the Redmond company.

But it doesn't stop there: in fact, Microsoft has also improved its new one browser Edge making it faster and safer. For parents, however, new settings have been introduced for the parental control that offer the ability to limit the use of a Windows 10 device or Xbox One console to their children. Here are all the news of Windows 10 Creators Update.


The official release of the update Windows 10 Creators Update it will officially start on April 11, but it will not happen at the same time for all users. Microsoft will use the classic staggered technique: within a few weeks all users will receive the update and will be able to install it on their device.

Limiting our creativity to just two dimensions can be a problem for anyone working in the digital world. For this reason, Microsoft has decided to concentrate its efforts to introduce a new program dedicated exclusively to three-dimensional objects in Windows 10: Paint 3D. The historic program of the Redmond company changes face and becomes a very useful software for working on three dimensions and giving vent to all your creativity. Over the next few years, the 3D printers will grow by 62%, becoming one of the pillars of the digital economy. And Microsoft doesn't want to be caught unprepared. Paint 3D is just the first step towards a different future.


Furthermore, the new program of the Redmond company will be one of the applications present within the new headsets for mixed reality that Microsoft is developing together with Asus, HP, Dell e Lenovo. Compared to the competition that has decided to invest in virtual reality, Microsoft wanted to make a different choice and focused on mixed reality. The first devices will be launched towards the end of 2017 at a price of 299 dollars and will present many new applications developed by the Redmond company specifically for the new headsets.

The video game industry will be increasingly important in Microsoft's future. And the demonstration takes place directly from Beam, the platform developed by the Redmond company that allows users to send in live streaming your own challenges. The goal is to be able to snatch the throne of the most used platform from Twitch to talk to other gamers around the world. The platform will be integrated directly into the Xbox One and Windows 10 computers. Having a unique environment where you can chat with your friends, even if they use a different device, may be one of the strengths of Beam.

In addition, the new “game mode ", which will allow users to set up their computer in the best possible way according to the requirements of the game. Another sign of Microsoft's interest in the gaming sector.

Microsoft Edge, even safer and faster

Other interesting news will also come with regard to Microsoft Edge, the browser that replaced Internet Explorer. According to data provided directly by the Redmond company, Microsoft Edge will be faster than Google Chrome and at the same time protect users from the attack of malware and phishing mails. On the notebook front, with the same battery consumption it guarantees an hour and a half more consumption. In addition, some new features have been introduced in the tab management that will allow you to work faster and improve the view of video content.

With Windows 10 Creators Update the parental control. Parents will be able to monitor their children's activity and decide how long to use their computer or Xbox One. Shealth of its users it is always at the heart of Microsoft's projects. And for this reason a new modality has also been developed "Night" which will allow users not to tire their eyes while using the computer at night. The new feature is especially dedicated to night owls and to those who use their smartphone even during the night. With the night mode the colors will change, tiring the eyes less and resting the brain.

In the words of Microsoft, Windows 10 is the safest operating system on the market and has been chosen by many companies to protect their employees from malware and ransomware attacks. With the Windows 10 Creators Update, the Redmond company has introduced a new tool to protect users from attacks: Windows Defender Security Center. In a single platform it is possible to control all the settings concerning the antivirus, the firewall and the health of your device. Furthermore, the user will have much more control over everything concerning the permissions required by the programs that are installed on the computer.

In addition to user safety, Microsoft has also kept an eye on privacy. The user can check the various settings of the operating system at any time and choose what to share with others and what to keep for himself.

Along with the announcement of the launch of the Windows 10 Creators Upfate update, Microsoft also announced the launch of the Surface Book and Surface Studio in new markets. After the presentation in October last year, Il Surface Studio will be available for order in Australia, Canada and New Zealand, while the Surface Book will be available from April 20 in Austria, China, Denmark, Finland, France, Germany, Hong Kong, Japan, the Netherlands, Norway, Sweden, Switzerland and the United Kingdom.

Some of the videos in this section have been taken from the internet, therefore considered in the public domain. If the subjects present in these videos or the authors have something against the publication, it will be sufficient to request removal by sending an email to: team_verticali@italiaonline.en. We will delete the video as soon as possible.

Windows 10 Creators Update arrives on April 11: what it is and what changes

Audio Video Windows 10 Creators Update arrives on April 11: what it is and what changes
Windows 10, problems with PDFs too after update ❯

add a comment of Windows 10 Creators Update arrives on April 11: what it is and what changes