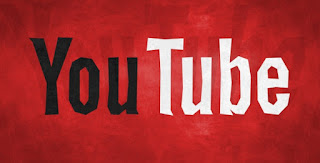 YouTube is one of the most used video sharing platforms in the world, where you can find music videos, funny videos, vlogs and so on for free, an account is not even required (although it is preferable to create one in order to add your favorite videos and to follow the channels we like best).
If we are avid YouTube users but do not have a TV with support for Smart features (for example small TVs in the bedroom or monitors without tuner for digital terrestrial channels), we can quickly fix it by using some cheap and complete devices to enjoy the YouTube videos as if we were on the PC, with a much higher comfort than the mouse and keyboard.
In this guide we will show you how to watch YouTube on a large number of different devices: Simple TV Box, Now TV Box, Chromecast and Fire TV, it is up to us to choose the best method to take advantage of the video platform.


The Now TV Box is offered by the Now TV on-demand service to access hundreds of multimedia contents offered by Sky without the need to place a dish on the roof, using the Internet connection to watch any film, TV series or entertainment program. .
In addition to the Sky contents, it is possible to take advantage of the Now TV Box to see YouTube channels and videos, just open the home of the device, go to the App (we can also use the homonymous button on the remote control) and open the pre-installed app YouTube. 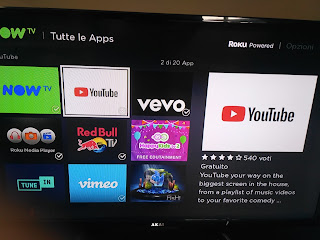 Let's select it and use the voice to open the app Open app.
After a few seconds we will see the YouTube home screen in TV mode, adapted for use on large screens. 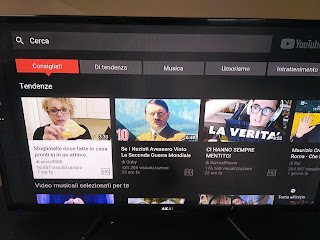 We can use the search bar at the top to find other videos, select the ones recommended or present in the various categories and enjoy them at the highest quality.
To control the app we can use either the remote control of the TV Box (very inconvenient) or use YouTube's interaction with other mobile apps; let's make sure you have a smartphone with the YouTube app installed, connect to the same network where the Now TV Box is connected and, from the Youtube app on the smartphone, use the Cast button at the top to associate the YouTube app on the TV Box. 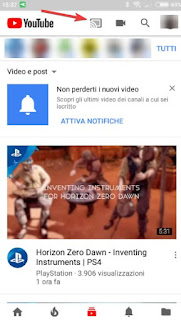 We will be able to type comfortably using the smartphone keyboard and load the desired videos by searching for them on the portable device without going crazy with a remote control.
The peculiarity of the Now TV Box is to always remain on (low energy consumption), so once the YouTube app is open we will always display the Cast button when we connect to our network, so that we can turn on the TV immediately and immediately see the YouTube video without even using the remote control.

ALSO READ: How to see Sky without a satellite dish and a fixed subscription


Another easy way to watch YouTube is to use the Chromecast, which adds support for the Cast protocol to any TV it is installed on.
Once configured and connected to the home WiFi network, it will be sufficient to use a portable device (a smartphone or tablet) connected to the same network, open the YouTube app on it and use the same Cast button seen in the previous image (on Now TV Box).


Chinese TV Boxes also allow you to watch YouTube in good quality, to the point of currently being one of the cheapest ways to view the platform's videos on any home TV.
First of all let's get a good cheap TV Box among those available here -> Best Android TV BOX.
We assemble and connect the TV Box to the home WiFi network and to the TV via HDMI cable; we select the right video output and use the YouTube app, usually present in the bundle of pre-installed apps on all TV Boxes (at least the tested ones).
If we can't find the YouTube app among the pre-installed ones, we can always use the Google Play Store to retrieve it; click on the Store icon, log in with our Google account and search for YouTube, in order to install it on the TV Box. 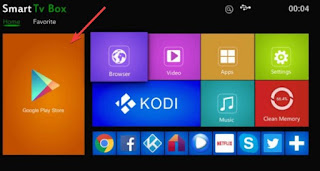 The management of the app is very similar to that already seen on Now TV Box, with an interface optimized for use on large screens and the interaction system via the Cast protocol, which allows you to control the YouTube app ( present on the Chinese TV Box) from other homonymous apps installed on smartphones or tablets, so as to be able to send videos and control playback.

How to watch YouTube on Amazon Fire TV Stick


To conclude, let's talk about the Amazon Fire TV Stick, an HDMI dongle that allows you to install apps directly in the device's memory and exploit them using the remote control, in a completely different way from Chromecast (which instead acts as a simple player).
After a fight between Amazon and Google, Youtube is now back as an app and you can find and install it from the Fire TV's application list.
Alternatively, you can also watch YouTube from the integrated Silk browser, which offers full support for YouTube videos. 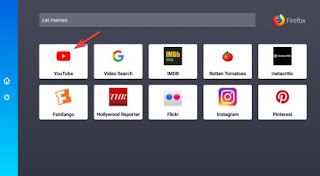