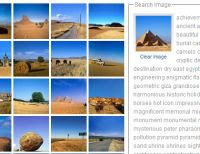 The way we search for information online is constantly changing. One of the most interesting and (relatively) new methods currently being developed by web companies revolves around the idea of use images as a basis for research.
In other articles we have seen several image and photo search sites, which allow you to find results based on color, size and subject but these all have one thing in common: words are used to search.
On this page we see instead of search engine different, where they can find images that are similar and resembling one another. Basically, instead of searching by writing, for example, "colosseum", you can upload a photo of the Colosseum and see all images identical, resembling or similar to the Colosseum or to that specific photo.

Using the images as the basis for the search key, the resulting results are completely different, sometimes they are photos of the same subject but other times they refer instead to different things, which however have a similar figure. After several years of experimentation, we can say that these services work really well at recognizing what is in every photo and image and finding results on the internet based on what is represented.

The best sites to search for images using other images

1) TinEye is an image search tool developed by the same company as BYO, it works better and browser extensions are also available (Chrome, Firefox, Internet Explorer and Safari).
Once these extensions are installed, you can search for images similar to the one used as the search key. TinEye seems to be focused on exact matches therefore search for images that are related to the same subject. TinEye can tell if the images have a different resolution and becomes an important tool for check that someone is posting copyrighted or personal photos and images on the internet (and potentially embarrassing). Anyone who visits the site can use an image computer like starting point for a research or you can use the web address of a photo posted on the internet. The engine that produces a series of relatively similar images based mainly on color similarity and then also based on the crafts and to the graphic similarity but not on the context.

2) Google searches for similar images allows you to search via file or via the URL of an online image. After a first search made by writing a word, you can go with the mouse over one of the figures found and then click on "similar" or "other dimensions". The similar image search function allows you to find out what is in a photo, who is a person, find fake news or investigate the origin of memes posted on Facebook.

3) On the site Bing Visual Search there is a similar image search engine like that of Google, with a first search by word and then a system to find images similar to those found. Bing allows you to take a photo, upload a photo or add an image via URL.

4) PicSearch is one of the simpler reverse image search engines, designed to identify places, plants, artwork, and animals in images. It analyzes a photo uploaded by the user and pulls out a list of similar images the lists then similar images saying also what they refer to. After uploading the photo from your computer, you must select a category from those proposed: animals, biological elements, panoramic scenes or artistic representations and others. When you click on one of the similar images found, you get a description of what the image represents. Advanced mode allows you to select a specific portion of a photograph.

5) Duplichecker, as well as Report Seo e Hosting Checker, is another "reverse image" search engine, where you can upload an image or indicate the internet address where it was published to find the online results of similar or identical images.

6) PicTriev is a site specialized in finding faces and faces similar to that of the uploaded photo. I had already mentioned this site in the list of sites to search for photos of people on the internet.

7) PimEyes is a great site for looking for similar images, especially perfect for finding people from a photo or discover the double, as written in another article. Unfortunately PimEyes is very limited in the free version.

Returning to Google, I take this opportunity to mention the application for recognize things and places from the camera with Google Lens available per iPhone e Smartphone Android. This tool allows you to search on Google by selecting a part of the image in a photograph taken by the mobile phone. For example, with a photo of a bottle, you can say Google what is written on the label.

How can these tools be used in a useful way?
For example, to search if someone has stolen their images or photos, or to track down photos of people and friends, to find other places similar to those they like, to check the competition that sells the same product or, in general, to find inspiration.

Chrome tricks, tools and commands to use ❯