If you want to know how to activate the cheats on Minecraft, in the next chapters I will explain in detail how to perform this operation on the two versions of the game that are currently most popular: Minecraft Java Edition for computer e Minecraft Bedrock Edition available for Windows 10 PCs, game consoles and mobile devices. 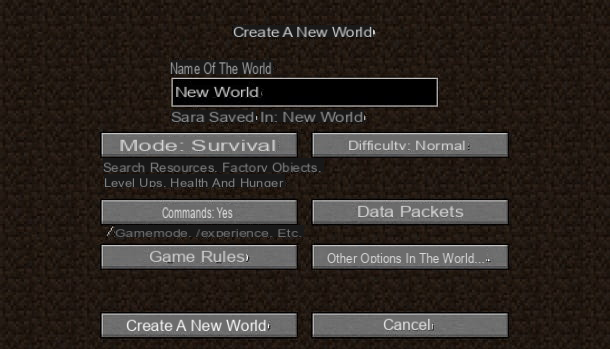 You stai chiedendo how to activate the cheats on Minecraft PC? Nothing simpler! Up Minecraft Java Edition, the traditional version of the game available on Windows, macOS and Linux, you can enable the cheats in different ways, acting before the creation of the world or immediately after.

While with the first method you are guaranteed the activation of the command console for the tricks during the whole game session (and every time you access it in subsequent moments), with the second method you can enable the command console only temporarily and for the current session. However, it is the only way forward in case you haven't enabled cheats since the creation of the world.

So let's move on to the action and focus on the first method, that is, the one that consists of creating a new world in Minecraft with the tricks already enabled. In the Minecraft Java Edition start menu, press the keys Single Player e Create a new world and you will access a new section through which to customize the world in which you will play.

Leaving aside the other options, whose modification is at your discretion and not useful for the purposes of this guide, what you have to do is press the button commands, in order to change the wording in Yes. Once this is done, press the button Create a new world and a game world with cheats enabled will be generated.


Just a consideration on the latest versions of Minecraft Java Edition: starting from version 1.16, called Nether Update, the world creation menu has changed, adding several options that allow you to manage some parameters of the game (Rules of the game). This panel is useful as, in some cases, you won't need to use cheats.

For example, you can create a world in Creative mode without creatures or you can make sure that there are no changes in weather conditions; you can even prevent the night from coming to the world of Minecraft or the loss of equipped items or inventory when the avatar loses all health points.

If, on the other hand, you have already created a world in Minecraft, to enable the command console you must act from the pause menu of the game session. To do this, press the key Esc and, among the items that are shown to you, click on the one named Open in LAN. At this point, click on the button commands, in order to change the wording to Yes and then, press the button Start the world on LAN, to enable the command console for the current game session.

Do you want to know how to activate cheats on minecraft ps4 or on one of the other platforms on which it is available Minecraft Bedrock Edition? If so, know that the procedure is simpler than you can imagine.

First, in the Minecraft main menu, press the button Play and then select the items Create New> Create New World. Once this is done, scroll down the screen until you find the option Activate cheats and move the relative lever up ON. If you do not need to perform further customizations in the world of Minecraft, you just have to press the button Crea and start your game session.


If you've already created a world in Minecraft without enabling its cheats, you can still do it at a later time. How? Go back to the main game screen and press the button Play. Then locate the previously created game world and press onpencil icon present at his side.

Now, you just have to perform the same procedures that I indicated in the previous paragraphs to enable the command console: scroll the screen and locate the option Activate cheats, move the relevant lever up ON and premium tasto Play to confirm the changes made.

How to use cheats on Minecraft 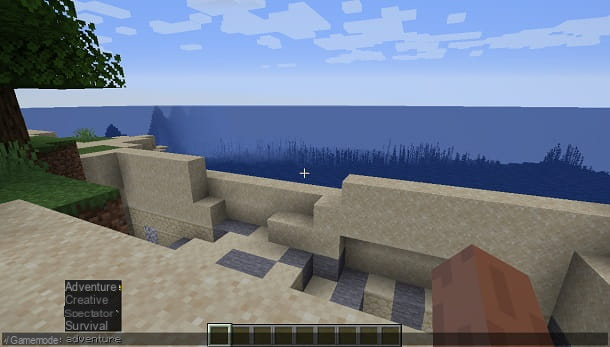 After you've enabled the command console, it's time to see how to use it. First, you need to open the game chat by pressing the key T on the keyboard. To open the Minecraft chat on other platforms, just click on the relevant icon: for more details, you can consult my guide dedicated to the topic.

Having done this, in the appropriate text box that is shown to you, type the commands to use. There are many commands available in Minecraft that you can easily recall by simply typing the character / on the chat.

For example, if you want to change the game mode from Survival to Creative, type the command / gamemode creative followed by pressing the key Submit, to confirm its execution. If you want to learn more about this topic, I suggest you read what I indicated in my guide on how to use commands on Minecraft: you will not regret it!

add a comment of How to activate the cheats on Minecraft

Check the questions of our users and the answers of our experts.