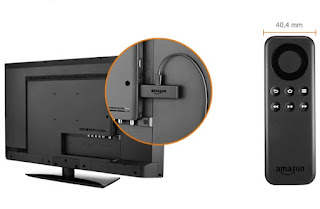 One of the technological products of the current year is certainly theAmazon Fire Stick, the mini box to be attached to the TV to make it "Smart", that is to add an internet connection and the necessary apps to be able to watch on TV and stream from the internet, without having to turn on the computer, movies from Netflix, Amazon Prime Video and videos from Youtube.
The Fire Stick, which is like an Android mini PC, si può comprare in el paese on Amazon at 60 Euros in its Basic version, which compared to the more advanced versions available only in the USA lacks some features such as voice commands, support for USB sticks and streaming in high quality, but it works very well, also very easy to configure and to use.
Since the Fire Stick is an Android device, even if it is very personalized and limited in its settings, it still has many more functions than those that can be read in the manual included in the package and allows, in addition to watching movies from Netflix, also to do many others things as we are going to find out in this article.
Below, therefore, the guide to the Amazon Fire Stick with the best tricks and apps to be able to take advantage of every function, even the most hidden ones.

1) Use your smartphone as an Amazon Fire Stick remote control
Although the Fire Stick comes with a remote control, you can also use an Android smartphone or iPhone as a remote control.
The app to install is Fire TV Remote, available for both Android and iPhone.
The phone screen replicates the layout of the official remote control, with the 6 keys at the bottom and a touchpad in the center on which you can swipe your finger to go up, down, left and right.
At the top there are the keys to access the settings of the Stick and the installed apps.
Unfortunately, a key is missing to do global searches and the voice commands do not work because the Stick Basic does not support it.

2) Using the Fire Stick on hotel and hotel TVs
Since hotel TVs are always limited to a few channels, if there is a wifi network available we can use the Fire Stick wherever we go.
The important thing is to connect it to the right wifi network from the Settings> Network menu, find the network you want to connect to.
If necessary, you will have to log in from a registration web page and you can use the three-line button to switch between fields.

3) Fix apps that won't start and recover memory space
If some application such as Amazon Prime Video or Netflix does not start or has problems loading movies, you can repair the application by deleting the data it has stored during previous use.
Then go to Settings> Applications> Manage installed applications, identify the one that is not right, press on it and then do "Clear data" and "Clear cache" to reset it.
This operation is also useful to recover space on the internal memory of the Stick, which we remember only has 8 GB of space and cannot be expanded (support for USB sticks is only available in version 2)

4) Play android games with joypad
On Amazon Fire Stick you can install many of the games developed for Android, such as Asphalt 8, Tetris and many others.
These games can be played using the remote, using the Remote app on the phone as seen in step 1, or with a Bluetooth JoyPad, which is best.
You can buy an Amazon Stick joypad on Amazon, paying a price between 20 and 30 euros.
To configure the joypad on the Fire TV you have to go to Settings> Controllers and bluetooth devices> Game controllers

5) Install applications and games for Android not on the Amazon lists
The Amazon Fire Stick is an Android device like any Samsung or Huawei smartphone, only it has a modified interface that is very different from the regular Android.
Among other limitations, it is not possible to access the Google Play Store to install applications.
To find new apps to put on Amazon Fire Stick you can go to the categories menu and press on the one you want to download.
If you want to install a game or a special app that is not in the Amazon catalog, there is an important trick.
First of all, you need to go to Settings on the Fire TV, to the Device> Developer Options section and activate the Applications from Unknown Sources and ADB Debugging options
The application must then be installed on an Android smartphone Apps2Fire which allows you to transfer any of the apps installed on your phone to the Fire Stick.
The initial configuration is very simple and Apps2Fire will immediately recognize the Stick which is connected to the same Wifi network as the mobile phone.
From the list of applications installed on the phone, Apps2Fire allows you to send their APK installation file to the Fire Stick and proceed with the installation without any difficulty.
This way you can also add Kodi su Fire Stick, SkyGo, NowTV and other apps for watching videos (including Youtube).

To find out more details, you can read the guide on ways to download and install android apps on Amazon Fire TV Stick.

6) Browse the internet on the Amazon Fire Stick
The Fire Stick allows you to browse the internet from your TV as you would from a computer.
Among the recommended apps and in the Web Browser category you can find and install some web browsers, among which there are currently two better than the others: Firefox e Silk.
Both work well, even with all the limitations there are when trying to read a site like this using a remote control without a keyboard.

7) Vedere Youtube su Fire Stick Amazon
The Youtube app, as well as Youtube Kids, is available today on Fire TV in the application list. You can also access Youtube from Fire Stick using your default web browser.
Since Youtube is inconvenient to use with the FireStick remote, the trick is to use the Youtube app on an Android or iPhone smartphone to search and browse videos.
In fact, from the Youtube application it is possible to choose the video to see and then transmit it, using the "Cast" button on another screen which can be that of Youtube on the Fire Stick.
For more details, see the guide to remote control Youtube on PC with mobile phone which also applies to the Fire Stick TV.
8) See computer videos on Amazon Fire TV
This is one of the most interesting tricks on this list, because you can make the Fire Stick like a Chromecast, which is a device on which to stream video from your computer.
The app to use in this case is Plex, present in the catalog of apps highlighted on the main screen.
By installing Plex also on the PC, you can then activate the media center and broadcast the films we have on the TV.

9) Watch videos from an Android smartphone or tablet on Fire TV
If you want to transmit videos or photos from your Android phone or tablet, there is another application that allows you to do so, available in the Amazon catalog: AllCast.
After installing AllCast on the Fire TV, you must download AllCast on Android, open it, select the FireTV from the available divices and then choose the content to transmit from those contained in the internal memory of the phone or tablet.
Also great is the Cast To TV app, which supports Chromecast and Amazon Fire Stick

10) Cast PC or Android screen to TV with Fire Stick
This is perhaps the most interesting trick of the list, because it gives the possibility to cast the screen of the PC or Android phone on the TV and be able to see everything you want without the need to use applications.
The Fire TV Stick is, in fact, a receiver Miracast, a protocol natively supported by Windows 10.
To activate Miracast reception, press and hold the Home button on the remote control until some buttons appear on the screen, including one called Duplicate.
Once you hit Duplicate, the Fire TV is ready to receive from another device.
On a Windows 10 PC, you can then open the Start menu and go to Settings> Devices.
Under Bluetooth and other devices, click on Add, let the PC detect the fire TV and establish the connection.
The desktop will immediately appear on the Fire TV screen, acting as a secondary desktop.
You can then move the windows from the PC desktop to the right to make them appear on the TV.
In this way it is possible to stream video even from sites that do not have an application, also because the Miracast transmission also supports audio.

On Android, to see the mobile phone screen on the TV, touch the Mirror Share button in the switch bar or go to Settings> Device connection (on Huawei it works but not all Android smartphones have this function)

13) Listen to TV via Bluetooth headphones
You can pair the Fire TV with a pair of bluetooth headphones to listen to the audio of the movies you watch on Netflix or Youtube videos.
To make the headphones work with Amazon Fire Stick you need to go to the Settings menu> Controllers and Bluetooth Devices> Other Bluetooth devices to make the connection.

14) Re-pair the remote if it no longer works
If there is any problem with the Fire Stick remote control, if it doesn't work, it can be easily fixed.
You have to hold down the Home button together for five seconds to get it back connected.

Other Fire TV tricks are described in other articles including:
- Enable surround between Amazon Fire TV and Amazon Echo
- Control your Fire TV with your voice
- Free up memory space on the Fire TV Stick if it is slow or buggy
- Type with keyboard on Fire TV
- Hear TV audio (with FireTV) on Amazon Echo

Help Google Chrome on PC to use its most useful features ❯