Here is the first video posted on YouTube 11 years ago

All web giants started small, this is also the case with YouTube. Created 11 years ago, February 14, 2005 to be exact (yes, we're getting old). We found the very first video posted on the video platform, a few weeks later, on April 23, 2005 to be precise. You will see, we are far enough from the big show! 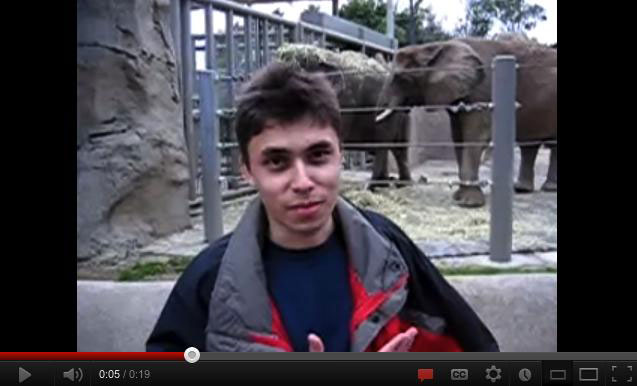 For those who don't know, YouTube was not created by Google. The search giant simply bought it on October 9, 2006 for the modest sum of 1,65 billion dollars and a few cents, just one year after its creation. But YouTube first came to life thanks to one of its founders, Jawed Karim, who in February 2005 posted the first video, showing it to the San Diego Zoo to admire the elephants (and hear the goats if you prick up your ears).

Only 35 million views for the San Diego Zoo video

We are quite far from the clips of Lady Gaga or the Gangnam Style of Psy which holds the viewing record on YouTube, but with 35,1 million views, the first video is doing honorably, especially when we see the duration and the content Jawed posted at the time. Today, YouTube has met the success it was given and is the second largest content search engine after Google.

In 11 years, essential channels have been born and new videos have broken records. We leave with the top 5 videos and YouTube channels since its creation. Do not hesitate to give your opinion on this video which has entered the history of the web.

The 5 most watched videos of all time

The ability to speed up or slow down a video on YouTube can be very useful. It was possible to do this in the web version of the platform for a while…YouTube now offers a Night mode, also called Dark mode, to change all light surfaces to dark surfaces. Since we always make it easy for you, here's how to activate the mode… First broadcast in 1984, the famous animated series based on Transformers toys was uploaded to YouTube. You can now watch videos for free…In order to increase subscriptions to YouTube Premium, Google is testing a cheaper subscription in Europe. It's YouTube Premium Lite, which offers browsing that includes YouTube Kids and…

Audio Video Here is the first video posted on YouTube 11 years ago
Your smartphone no longer turns on: 5 possible causes and solutions ❯