How to block a number on mobile 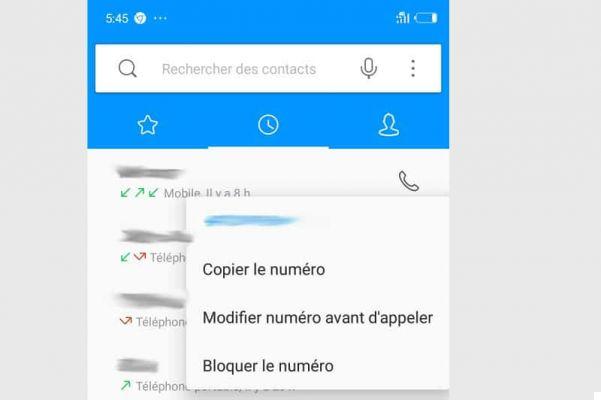 Mobile phones, and a fortiori smartphones, allow us to be connected and reachable all the time. What can be considered progress also opens the door to easier harassment. Fortunately, it is now possible to easily block a number to avoid receiving text messages or calls. Peace of mind is just a click away.

Blocking an unwanted number on an iPhone is a relatively simple process. There are several ways to operate that all lead to a similar result: the inability for a specific number to call you or even send you SMS.

The first method requires having already saved the unwanted number in its contact application. If so, then go to your “Settings” app and choose the “Phone” section from the list. Once in this sub-setting, in the “Calls” section, choose the option “Blocked numbers” then click on “Add”.

There, the list of your contacts unfolds and it is possible to search for the desired number. Simply click on the contact's name and it will be blocked. Text messages will no longer reach you and all calls will be automatically redirected to your voicemail.


There is another way to block a number. In the "Calls" tab of the phone application, where the communication history stands, an "i" icon is next to each name. By tapping on it, you arrive on the “Info” page of the correspondent where an option called “Block this correspondent” appears. By selecting it, you send this contact to your blacklist as seen previously. The ban applies to both calls and SMS.

The same goes for the Message application: On a conversation thread, tap on “Options” then on the “i” next to the name to find the possibility of blocking the correspondent.

Another interesting option is to block unknown numbers on iMessage. So you will no longer see messages from numbers not saved in your directory. To do this, go to the "Settings" application and then to the "Messages" section where you find the option "Filter strangers". Be careful, this manipulation only blocks iMessage, conversations between iOS devices, and not simple SMS.

On Android, the situation is a bit more complex than on iOS due to the various overlays and modifications made to the system by manufacturers. However, the handling differs only slightly from brand to brand.

On Samsung phones, blocking a contact is a two-step process: first rejecting calls and then text messages. To reject calls, open your “Contact” app and tap on the contact you want to block. Once on their file, press the "Menu" button (the 3 dots at the top right) and select "Add to the automatic rejection list"


Secondly, to block text messages, go to your Messages application, do a long press on the conversation thread that you want to see disappear, then press the Stop icon in the top banner; this will add this number to your spam and you won't hear from it again.

On Nexus devices too, the process is done in two stages. You must first go to the Contacts application, select the person to block, press the pencil icon at the top right to modify the information, then once on the "Edit contact" screen, press on the Menu button at the top right and select the option “All calls to messag. voice »

To block text messages, you must go to your default application (Hangouts or Messenger), open the conversation thread to be blocked, tap the Menu button, choose “Participants and options” then select “Block [the name of your contact] ".

the process is more direct on HTC phones: in the "Contacts" application, select the number to be blocked then choose the "Block contact" option which is directly in the details panel which has opened.

At LG, a hub centralizes all your blocked numbers. To find it and add unwanted numbers, go to the "Settings" application, in the "Networks" tab, choose the "Calls" sub-category then select "Call rejections" and "Reject all calls of”. There it is possible to add numbers to ban, whether or not they are saved in your directory.

To prevent SMS from arriving, you must open your "Messaging" application, make a long press on the conversation thread you want to evacuate, then choose the option "Save Spam number".

We find in all the other Android smartphone manufacturers one of these logics. It is often necessary to operate in two stages to first prevent a number from calling, then prevent it via a second manipulation, from sending SMS.

To block a number, Windows Phone users must go to their call log on the phone application, or on the list of conversations in the message application, then make a long press on the contact to be blocked and choose it. 'block number' option that appears in the drop-down menu. Text messages and calls from this number will all be filtered after this manipulation.

To see the list of blocked numbers, go to the “Settings” application then to the “Call + SMS screening” section. From here you can see how many calls and text messages have been filtered, as well as remove certain contacts from the blacklist.

BlackBerry phones do not have a native feature to block a specific number. However, it is possible to filter all the numbers that are not saved in the contacts. To do this, go to the "Settings" application, then "Security and confidentiality" and "Deactivation of functions". From there, toggle the "Feature Disable" switch and set a password and recovery question, as prompted. After that, there are two checkboxes for rejecting calls and SMS from numbers not listed in the phone contacts app.

To exercise more precise control over the numbers to be blacklisted, you must turn to third-party applications available on the Blackberry World, such as Call Blocker 10 or Free SMS Blocker. They allow you to draw from your contact list to block a particular number. Unfortunately, the free versions are limited and you have to take a few euros out of your pocket to unlock all the features available.

If you decide to use these solutions, remember to block the standard number as well as its variation preceded by the country code (06 88 88 88 88 and +33 6 88 88 88 88, for example), since the applications do not do not make the connection between the two ways of presenting the number.

add a comment of How to block a number on mobile