How to call with Windows 10 using your smartphone 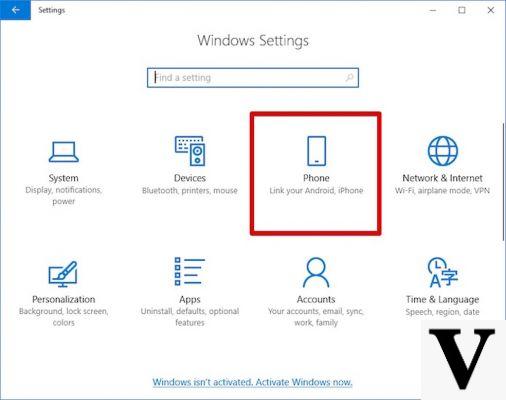 After having made it test for several months to users registered with the Windows Insider program, Microsoft has released a new feature to the general public: the phone calls within Windows 10, via the SIM card of our mobile phone.

Today it is possible to do them within the app for Windows 10 “Your Phone“, which in cittàn is simply called “Your Phone“. With the same app it was already possible receive on the Windows desktop notifications from our connected Android smartphone, it was also possible to read SMS and reply to messages and, in addition, photos taken with the camera of the mobile device could be downloaded to the PC. All features that, in some cases, can also be done with specific apps developed by smartphone manufacturers while, on the contrary, Your Phone is a universal app for all mobile phones. The “Your phone” app, in fact, has the only limitation of being able to connect with a smartphone with an Android operating system (from Nougat 7.0 onwards) and not even with Apple iPhones.

How to make phone calls from Windows 10

To take advantage of this new feature it is necessary, first of all, connect smartphone and PC. To do this, you need to download the Your Phone app from the Microsoft Store to your PC and, at the same time, download the "Your Phone Complement" app from the Play Store to your smartphone. After installing and configuring the two apps on their respective devices, and having correctly connected smartphone and PC, just use the interface of the desktop app to receive and make phone calls from / with the smartphone. From the PC it is possible to access the phone book and the list of the last calls on the mobile phone, and it is possible select one of our contacts and initiate the call.


Your smartphone always in your pocket

With the possibility of call e receive calls directly from your computer in theory, we can always keep the smartphone in our pocket or bag while we work without risking missing a call, a notification or a message. Microsoft is continuing to develop Your Phone app, to offer users additional functionality. Like the mirroring of the mobile phone screen on the computer display, a feature that arises from the collaboration between Microsoft and Samsung and that at the moment is only available for the Korean manufacturer's smartphones.

How to call with Windows 10 using your smartphone

Audio Video How to call with Windows 10 using your smartphone
Windows 10, what is the new Microsoft Search function ❯