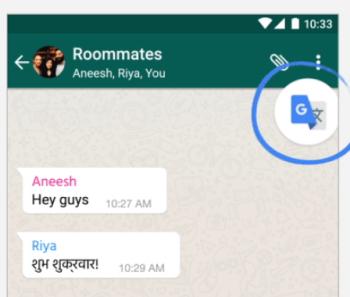 If before that Google Translate has always been considered among the best applications for every smartphone (in competition with the Microsoft translator app), it now becomes one of the indispensable ones after the new update of its apps, both the one for Android smartphones and the one for iPhone.
While on iPhone it is now possible to activate offline translation without internet connection (with the language download that is now no more than 200 MB but just 25 MB), on Android instead a very important function has been added that makes Google Translate a app integrated into the system, usable from anywhere and from all apps.

In other words, on Android smartphones starting with version 4.2, you can get Instant translations from Google Translate in whatever app you are using always ready whatever app you are using, to see the text written in other languages ​​immediately translated.
Since it is already possible to view natively translated web pages on Chrome, it goes without saying that this integration system of Google's instant translator in Android becomes very useful for chat and Messenger applications like Whatsapp, Facebook Messenger or reading apps like Twitter, where it is now possible to immediately obtain the translation of any message written in one of the 100 languages ​​supported by the translator.

This Google Translate integration in all Android apps it is not automatic, but must be activated.
After downloading and installing the Google Translate app or after updating to the latest version, open the app to display a box asking whether to activate the function or not Touch to translate.
Once activated, it is immediately shown clearly how to use the translator with other apps.
In practice it will be enough tap and hold on any word, phrase or text which is displayed on the screen ed use the copy key that appears at the top (it's the double square icon) to make the Google Translate icon appear floating in the top right.
By touching the translator, you can see the translated sentence in your preferred language or change to another of the supported languages.
In the Google Translate settings you can find some options for the function Touch to translate, choosing your preferred languages ​​and whether or not to show a notification every time it is used.

Another app to translate chats in real time, for Whatsapp, Facebook Messenger or other chats on an Android smartphone, is Hi Translate - Chat translator. This app can translate any text from WhatsApp messages into more than 50 languages, it also works offline and also translates voice messages and text inside images.

Chatting with foreign people on Whatsapp or Facebook Messenger now becomes much easier.

Data transfer via the web between Android, iPhone and PC ❯

add a comment of Immediate translations on Android chats and Whatsapp