Turn any site into a desktop app with Chrome on Windows 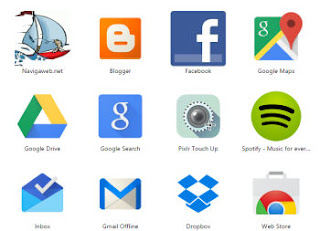 With Windows 10 we are receiving several updates even in the most popular programs, which try to integrate into the new Microsoft operating system in order to take advantage of its new features.
For example Firefox on Windows 10 looks different while Chrome on PC has added a small feature (which also works on Windows 7 and 8) to make each website as an independent app, whether it is bootable from the Start menu or even from the taskbar.
In this mode it becomes possible to open websites in a minimized and independent way from the main browser, without buttons and without navigation bar, with all the space taken up by the site.
In this case the app is not intended as a smartphone application that is downloaded and installed but simply a way to open a specific site in a separate windowby clicking on its icon.

To turn any website into an App that's enough open it in Chrome and then click on the main menu, the one with the three dots icon at the top right.
From here, go to Other tools and then click on "Create Shortcut".
In the popup you can select the "open as window" option and change the name of the site.
The icon of the site transformed into an app will appear in the Start menu among the recently added apps or, in the list of all apps, in the Chrome Applications folder.
Only in some sites such as Twitter, Telegram, Pinterest, does a new icon with a name appear in the address bar Install, which looks like a screen with the down arrow indicating the presence of a PWA (Progressive Web App). When pressed, the site will be installed on the PC as a native application and will work integrated into the system with the possibility of being able to open it in a dedicated window.

Sites transformed into apps are also found in the% AppData% folder MicrosoftWindowsStart MenuPrograms Chrome applications
By right-clicking on the icon added to the desktop, you can add the site / app to the Start menu or to the taskbar.
From the desktop, by clicking on the icon with the right button and going to the properties, it is also possible to change the icon displayed.
By clicking on the new application from the desktop you will be able to open that site in a separate and smaller window, without menus and without navigation bar, as if it were a single and independent app.
Apps added in this way are also visible in the app list in Chrome by pressing the top left button in the favorites bar. (the app section of Chrome can be discovered by pressing the right mouse button on the favorites bar).

The sites which have the better made to be open as applications, oltre ovviamente a , sono:

1) gmail, to keep the site open all the time, as if it were a mail program installed in Windows.

3) Whatsapp Web, to chat from a PC

4) Skype Web to call and chat without installing the program

6) Youtube, to watch videos with a dedicated page (especially the Youtube TV version works well as an app)

8) Google News to stay updated on what's going on.

Finally, it should be noted that the use of apps saves some memory on the PC.
In fact, by opening the Chrome task manager each site turned into an app is opened in a separate process making it easy to distinguish between sites that take up more memory and, at the same time, close the heaviest sites without having to terminate the browser.