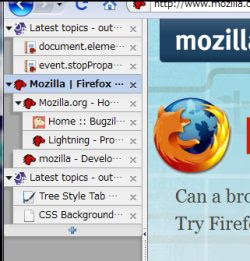 There are people who would prefer to have the tab bar open vertically, in a tree style, rather than horizontally, as is the default in Chrome, Firefox, Internet Explorer and all popular browsers. Effectively the vertical tab bar is very convenient for those who open many sites together on the browser and for those with a fairly large monitor, which always leaves ample space both on the left and on the right.
On the contrary, having the bar with the headings of the tabs open all at the top of the window restricts the space on the shorter side of the monitor.

As mentioned, most browsers don't allow you to view tabs vertically (the vertical tab bar was an option in Opera before it became identical to Chrome), so an additional extension is needed.

The only browser that supports vertical tabs or "vertical tabs" natively is Microsoft Edge. In the latest version of Edge just press the top left button to activate the vertical tabs. Press it again to return to the classic configuration with the tabs at the top.
In Edge's vertical tabs, you can also press the key to keep tab titles always in view or to narrow the side column and display only the icons of open sites.

If you are using Firefox, is there a way to keep it open a sidebar with favorites or history or synced tabs. To do this, right-click on one of the icons located to the right of the address bar and then click on Customize. Drag the Bookmarks menu icon from the center to the space at the top right and press Done. Now, by pressing the menu button of the bookmarks bar, you can find the option that opens the list of favorites on a side column of Firefox.
For Firefox there are also many extensions that you can use, among which, one of the most popular, is Tree Style Tab.
This add-on move the tab bar to the side in the Firefox window and allows you to see a much larger list of tabs than the horizontal setting. Also lets read the full title of each open site in a tab, so you can easily recognize it. However, the distinguishing feature of this extension is its appearance tree, so if you open several tabs of the same site or domain, they are grouped into a sub-category. So if you are looking for something on Google and you end up opening web pages of the same site, these are all placed close together and grouped.

With Google Chrome, until recently, that of vertical tabs was a secret option in the chrome: // flags menu, removed and disappeared for some time now. While none of the extensions have the same features as Tree Style Tabs on Firefox, Chrome users can still install Outline Tabs.
After installing this extension, a separate window appears, not integrated with the Chrome one, which lists the open tabs in vertical order. The tab list is unfortunately just a separate window, because there is no way in Chrome to display a list of the tabs in the sidebar, at least for now. Also Chrome does not allow you to hide the tab bar at the top, which remains visible in any case.
If you don't like it, there are also other extensions to have vertical tabs in Chrome such as Vertical Tabs

If you were looking for another browser that natively supports vertical tabs you can install the new one Vivaldi browser, born from the ashes of the old Opera versions, which has this option in the menu.

Find out where friends write to us on Facebook ❯

add a comment of Vertical tabs on Chrome, Edge and Firefox