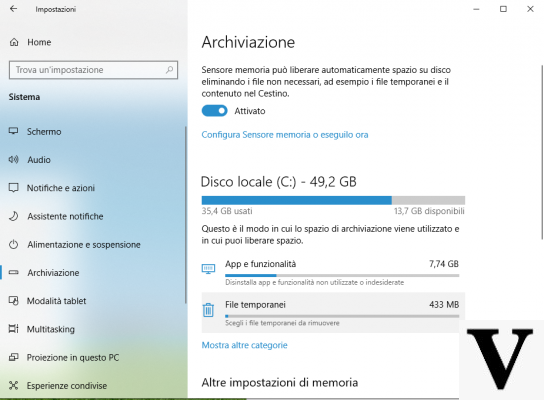 
Windows 10 is an operating system that, by itself, occupies tens of GB on the hard disk. It's not a big deal if the drive it's installed on is a traditional 1TB magnetic-mechanical drive, but it could become one if it's a small, fast SSD drive instead. Fortunately, however, much of the space occupied by Windows 10 can be easily recovered.

Of course, the first step is always to empty the trash: it may seem strange, but the "thrown" files can take up several gigabytes of space (especially if they are video). The second step is to take out the unused apps. And this, as well as freeing up disk space, it also helps keep the operating system in shape by lightening the registry.

Just search the Start menu for "Disk Cleanup" and launch the app of the same name to get started save space on Windows 10. Thanks to this utility, in fact, it is possible to delete temporary Internet files (but only those we have personally saved) and those of the operating system in one go, empty the recycle bin, delete file previews and much more. But above all, it is possible start cleaning up system restore point files and "shadow copies" of files (old automatic backups). The restore points, in particular, are those contained in the Windows.old folder and can occupy even tens of GB unnecessarily.

If, on the other hand, you just want delete temporary files (aware of the fact that, however, this is an operation that will allow you to recover even a few gigabytes of disk space) you will have to open the Windows settings (click on the start menu icon and then on the gear-shaped one on the left of the menu) and then Archiving. After scanning the hard drive, Windows 10 will show the folders that take up the most space: locate that of Temporary Files, click on it and do a good cleaning.

The latest versions of Windows 10 have a feature called "Storage Sense"(" Memory Sensor "in cittàn). It is a kind of automatic cleaning of the recycle bin and many files older than sixty daysi, which the operating system performs by itself in the background if it detects that the available disk space is becoming too low to guarantee acceptable performance. Just write "sensor" in the search bar of the Start menu to find it and configure it: at the first start it will be disabled. Between temporary files, apps and unused features and other files, the Memory Sensor can be able to take out, in one fell swoop, even over 50 GB.

Sometimes we don't even notice it, but our PC (like our smartphone) contains dozens and dozens of software that most of the time we almost never use, if not just installed. For this, a simple and "painless" way to recover space comes from cancellation of applications that we no longer use- To find out what they are, just open the Settings Windows, choose the section Applications and view the list of those installed. Once you have identified the one you no longer need, just click on the name and choose "Uninstall".

Finally, if we really can't do without all our files and delete at least some of them, we can decide to move them to another disk (both internal to the PC and external) to remove them from the disk where the operating system is installed. A second option is to move files, or at least the largest ones, to a cloud storage space such as Microsoft OneDrive, Google Drive or Libero Drive. In this case, however, we must remember to activate the option that automatically deletes the files from the physical disk after moving them to the one in the cloud.

add a comment of Windows 10, 6 modi to release spazio on hard disk