Windows 10, problem with the antivirus after the last update 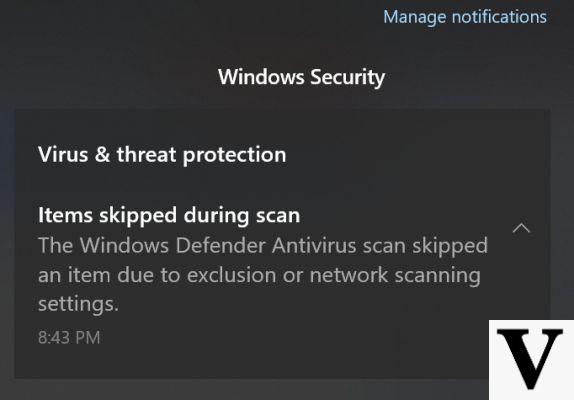 In the ranking of the best antivirus 2020 made a few weeks ago by AV-Test, an independent German company that deals with cybersecurity, the free antivirus Windows Defender had proved capable of competing with many commercial solutions, achieving a overall score of 17,5 out of 18 available points. Now, however, a bug casts doubt on its effectiveness.

The bug, needless to say, appeared after a Windows update and, as often happens with the bugs introduced by Microsoft updates, it does not concern everyone, but many. It is also being discussed quite heatedly on Microsoft's official forum, where different users with different configurations are experiencing similar problems. The only thing these users have in common would seem to be, at least at the moment, the fact that they have installed Windows 10 early March updates. Microsoft has not yet found a solution to this problem.

Windows Defender: The bug after the update

The problem encountered by many users is that, following the update, during the Windows Defender virus scan "Skips" some files. Not all our documents and applications, therefore, are checked and, consequently, could contain a virus. In practice, Windows Defender, at the end of the scan, informs the user that some files have been skipped due to This happens with both a quick scan and a deep file scan for viruses.

Windows Defender update which creates the problem seems to be 4.18.2003.4-0. Microsoft appears to be aware of the bug, but has not yet posted the patch or officially answered user questions.

Windows Defender bug: what to do?

Since no one arrives official response from Microsoft, many users are wondering if it is not appropriate to install (at least temporarily) an antivirus other than Windows Defender. The most sensible thing to do, right now, is to do a scan with Defender and see if the bug is also replicated on our computers: in this case, while waiting for the patch, you can install another antivirus. Otherwise there is no reason to do it.

Windows 10, problem with the antivirus after the last update

Audio Video Windows 10, problem with the antivirus after the last update
How to use gestures with Windows 10 ❯

add a comment of Windows 10, problem with the antivirus after the last update