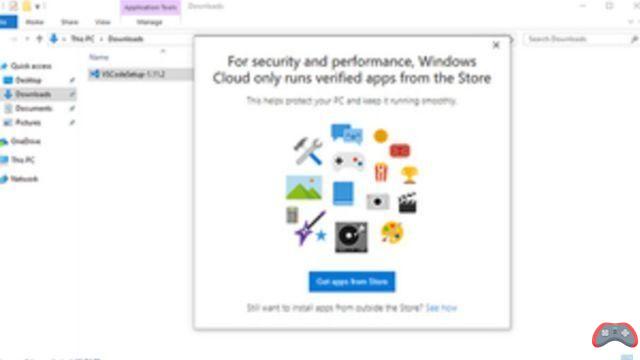 Restricted version of the famous operating system, Windows 10 S prevents the installation of applications other than from the Windows Store. A system as radical as generating absurdities, in particular with certain software… Microsoft.

Windows 10 S, almost everyone has already heard of it. Because it is the default OS on Surface Laptops and especially because it is impossible to install applications other than those present on the Windows Store. A limit that Mac owners know well since OSX has long offered the possibility of limiting installations to software from the Mac Appstore. The difference is that at Apple, it is only an option, which can be completely disabled.

On the Microsoft side, the situation is different and getting rid of the constraints of Windows 10 S can only be considered by going to the checkout to afford a full version of the system – but the migration to W10 Pro is free until the end of the year. If this is not the case, the user risks being faced with insoluble problems. Example as amusing as it is strange: it is perfectly permissible to uninstall the OneDrive synchronization client, but not to reinstall it afterwards. Why ? Simply because the program in question is not on the Windows Store. The only solutions then being to reset the system or switch to an unrestricted version.


Of course, we can ask ourselves the question of the interest of uninstalling the famous software, but the fact remains that the situation turns out to be quite comical, even a little absurd.

add a comment of Windows 10 S: uninstall yes, reinstall no