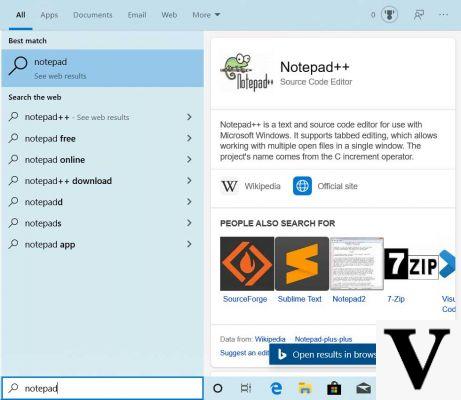 After the last Windows 10 cumulative security update, on Patch Tuesday in July 2020 which brought 123 fixes against as many vulnerabilities in Microsoft's operating system, some users report the disappearance of some pieces of Windows history: apps Paint and Notepad.

It has been rumored for some time that Microsoft wants to delete these two apps from Windows 10, but there is no official confirmation. To be honest, however, some reports regarding the disappearance of these two apps had arrived well before the recent update. But not only that: even some users who have not yet updated Windows to the May Update (Windows 10 2004) found themselves without Paint and Notepad overnight. The problem, therefore, is patchy and according to some interpretations depends more on the Microsoft Store than on Windows. But what's even stranger is the high variability with which this problem of missing apps occurs.

How to reinstall Paint and Notepad

If we no longer find the Paint and Notepad, then we have to look for them among the installed apps and, if they are not even here, reinstall them. You must then go to Application settings> Apps and features and search for them in the search box. There are very strange cases where the two apps are not found in Apps and Features but if we search for them from the normal Start menu search they pop up. If in both cases the apps are not there, then you have to go to the Microsoft Store, find and install them. But, even here, the problems are not lacking.

The problem at the Microsoft Store

Some users with the 2004 version of Windows 10 they reported of not being able to download or install the Paint and Notepad apps from the Microsoft Store. The Store tells them that both apps are already installed, even if that's not true, or that the operating system is not updated to the latest version, which is also incorrect. In other cases, users receive a warning from the Microsoft Store that to download the two apps they must update Windows to the 2004 version, but then they cannot do so because the update is not yet available for all computers.


Many users also claim that they cannot download Paint, which is a very old app, but of be able to download Paint 3D, which is much more recent. It seems, therefore, that the problem is both in the Microsoft store and in its Windows operating system, which are unable to communicate with each other so much that the first does not understand the version of the second.

add a comment of Windows 10, the latest update makes Paint and Notepad disappear