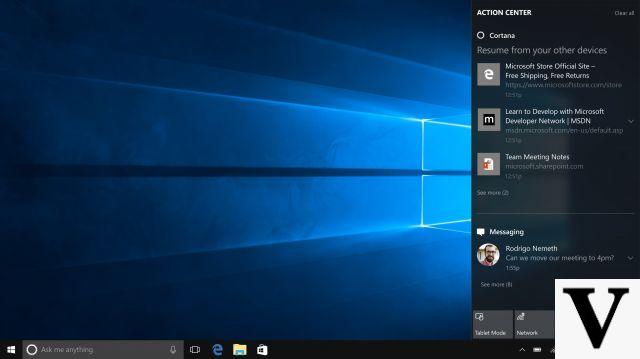 While most users have yet to digest - and download - the Windows 10 May Update, Microsoft engineers and developers are already hard at work. on upcoming versions of the operating system. The Redmond house, in fact, has established a timeline of semi-annual major updates, during which new features are released and existing ones improved.

And, according to what leaks from the secret rooms of the company created by Bill Gates, in the update that should arrive between October and November of this year, it should be present a completely revised and revamped version of Cortana. The artificial intelligence voice assistant designed by Microsoft engineers did not have the expected success and, according to the statements of CEO Nadella, Microsoft prefers to focus on an integration with Amazon's Alexa and Google Assistant. Despite that, Cortana will have another chance to try to get users to interact with you. For this reason, in the coming weeks, Microsoft will release a new user interface based on a new conversational engine with artificial intelligence.

According to the information reported by the online magazine mspoweruser.com, a developer included in the Microsoft beta test program (the Insider program to be understood) would have discovered a new Cortana app characterized by new features and a new interface.

The new look of Microsoft's digital assistant, as mentioned, it should be one with the new conversational engine presented by the Redmond house in early May during the Build conference. This technology should improve Cortana's natural language analysis and make the voice assistant better interact with users. This new system is expected to be introduced very soon, most likely within a few weeks.


Additionally, Microsoft will take advantage of this to separate Cortana from the "internal" search engine that allows users to search through files and folders on the hard drive. For this functionality, the Redmond company will release a new app, called SearchApp.