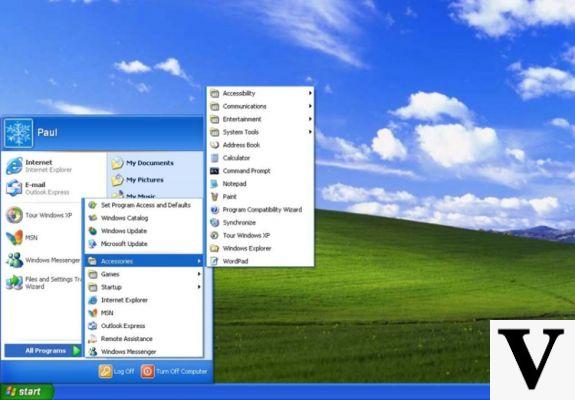 Microsoft is faced with a mistake that could have serious consequences. The Windows XP source code was published in a post on the 4chan forum and for four hours users were able to download it via Torrent or via Mega file sharing.

Retirement of Windows XP expects that the developers of the Redmond company will no longer develop compatibility updates with the new hardware produced, nor security patches since 2014. The publication of the source code of the Microsoft operating system, remembered for the famous green hills of the "Iconic Bliss" wallpaper, is not an immediate danger, as it is installed on only 1% of PCs in circulation worldwide. The hacker however they could use it to create new methods of attacking the most modern Windows 10, with consequences not foreseeable at the moment.

The source code of Windows XP appeared in a thread of the 4chan forum on September 24 and was online for just 4 hours. At first, many users thought it was one of the many fakes on the net, but they were wrong. Analyzing the code, some researchers confirmed that it was just that of the operating system released 19 years ago by Microsoft.

Despite the file has been removed, there are potentially a lot of users who have had the opportunity to download it from that moment on, either away Torrent that through the site of file sharing Mega.

Windows XP revealed: what are the risks

As of 2014, the Redmond-based company eliminated support for Windows XP. This implies that they have not been released for 6 years now security updates, nor compatibility update with the new hardware devices developed in this time frame.

On the other hand, the PCs that still use the operating system that accompanied us with its "Iconic Bliss" hill are very few and the risk of direct attacks on devices is low. Users who still use Windows XP they are therefore advised to be very careful, as there are no plans to release security patches to fix any problems.


What is worrying, however, is another: the Windows XP source code it may contain clues about the algorithms used by Microsoft even in newer versions of the operating system, such as Windows 10. The fear is therefore that malicious hackers may over time exploit the source codes to develop new methods to attack the operating system of the Redmond company.

While the network wonders about the possible consequences of the leak of the Windows XP code, dividing itself between those who are sure it is a risky thing and those who do not believe it at all, after the spread of the news the commeofficial Microsoft. Very close: “We are investigating what happened“.

A few words, but significant: Microsoft, in fact, does not have neither denied nor confirmed that the fact that thousands of hackers are now able to obtain a copy of the Windows XP code may be a problem. What is certain, however, is that estimating the source code downloads is completely impossible.