With Opera you can activate a free, unlimited and integrated VPN 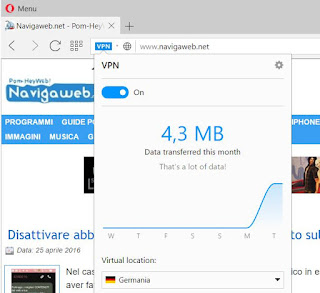 Opera is one of the historical computer browsers, always a great alternative to Firefox and Internet Explorer, which has fallen a bit, in terms of reputation and popularity, in recent years due to the choice to also be based on Chromium, becoming too similar to Chrome .
A recent change now makes Opera an attractive browser again, to be downloaded and used, at least in certain circumstances, when you want open sites that may be blocked or censored in el paese oppure per disguise the origin of the internet connection, without being identified and navigating safer.
The new feature is the possibility to activate a connection behind a VPN in Opera, that is a tunnel between two internet connections that allows to cover the real origin of the computer used and to encrypt the data transmission making it not interceptable.
Put simply, it is possible to make the sites we visit with Opera think that our location is, for example, in the USA, by making available those services that are only in the USA.
Opera is the first major browser to have such a service built into it, that is free and unlimited, while most VPNs are either paid or limited in traffic.

To use Opera's VPN, you need to download and install the latest version the latest version of Opera your Windows PC or Mac.
After installing and opening Opera, you can activate the VPN by pressing the Menu button on the top left.
Then go to Settings and then to the tab Confidentiality and security where will theoption that activates Opera's VPN.
Then put the cross on the "Enable VPN" option, under which it is written that it is a "Secure proxy provided by SurfEasy Inc., an Opera company based in Canada" service.

Opera's VPN is also in the browser Opera for Android.
Here you can go to the settings (from the button with the O) to activate the VPN service that will work when you open a site on a reserved tab.
By tapping the VPN option, you can also choose the virtual location, whether to use it for all cards and not just the reserved ones and whether to exclude the VPN for searches.
To open the confidential tab, press the button at the bottom of the tabs, tap on Reserved and then on the + at the bottom.
Note that Opera's is not reported by Android as a real VPN (in which case a notification would occur).

Dopo aver attivato l'opzione della VPN, provare ad aprire un sito come e notare in alto a sinistra, vicino l'indirizzo del sito, l'icona blu con scritto VPN.
By clicking on it you can enable or disable the VPN with a switch and choose whether to have our connection seen as coming from the US, Canada or Germany.
Depending on the state chosen, you will notice how the websites change language or you can read the advertisements no longer in the country, because the site thinks we are connected from the USA or Germany.

From the box that appears by pressing the VPN icon, you can also read the monthly data traffic graph using the service, which as mentioned has no limits at the moment. However, Opera's VPN mode has a limitation because it does not support WebRTC traffic which allows sites to understand if we are using a VPN or a proxy.
In the extension options, activate all crosses and select Disable non-proxied UDP (force proxy) in the drop-down menu.

The Opera Browser VPN itself is now also an app Opera VPN per iPhone e iPad.

Opera's VPN is one of the best out there, fast, reliable, you surf normally without suffering any slowdown and it is completely free with no limitations so much so that you could leave it active all the time.
The Opera VPN Problem is that it is mostly a proxy, which does not really cover the identity of the computer used and that the encryption does not affect all internet traffic (the traffic generated by plugins and by WebRTC is not filtered).
In practice it is not, at the moment, a service that makes anonymous as it is instead TOR Browser even if it may be improved before it is introduced in the stable version of the Opera browser.
However, the VPN remains avery useful service to connect to blocked sites in modo da poter godere dei contenuti che in el paese non sarebbero permessi per motivi di copyright, permessi o censure.
It's also a great way to try out new features on sites like Google and Facebook which often launch services only in the US for an initial trial.

Check cookies, how to block or delete them ❯

add a comment of With Opera you can activate a free, unlimited and integrated VPN