Zoom: all you need to know about Huawei's NM Card

Surprise guest of the Mate 20 and Mate 20 Pro announcement, the NM Card has caused a lot of ink to flow (digital, of course). Here is everything you need to know about this storage format developed by Huawei. 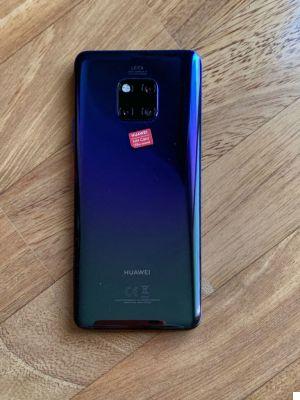 The impossibility of expanding the storage memory of a Mate was the main recurring criticism addressed to Huawei by its customers. In its defense, the manufacturer argued that with 64 or 128 GB of integrated storage, the extension of internal capacity was not an absolute emergency. The arrival of 4K video capture and support for photos in RAW format have changed things. and Huawei has started to work seriously on the subject. The most obvious was of course to use the good old microSD. the format is universally recognized and standardized by the SD Association, an inter-manufacturer organization of which Huawei is a member. Of course, micro SD was nothing new for Huawei, which has been using it for years in its products.

Using a Micro SD in the Mate 20 and Mate 20 Pro, however, posed a major problem, that of the size of the card. Don't laugh: despite an area the size of a fingernail, microSD is currently a cumbersome component. “The proliferation of antennas inside smartphones on the occasion of the launch of 5G makes any space saving in the device welcome,” explains François Hingant, Product Marketing Director of Huawei CBG Spain. And especially in smartphones that are ever more compact and that need to benefit from ever-increasing autonomy, an edge-to-edge screen and bi- or tri-camera modules... In short, selective sorting had to take place.

The first victim was the venerable audio jack port, much missed by audiophiles according to the recurring debates on the subject in the comments of our tests. Undoubtedly, the SIM card will follow in its footsteps one day or another towards the Pantheon of past technological glories., replaced by the eSIM… as soon as operators get used to the idea. Because the disappearance of a physical SIM deprives them (a little) of the control of the subscription of the user for the benefit of the manufacturer. 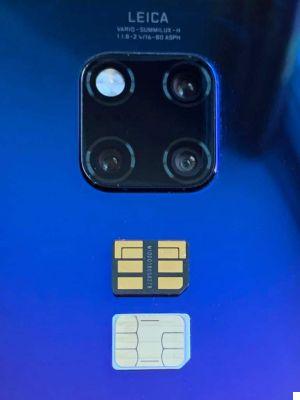 Huawei designed the NM Card to be compact first and foremost. It is undeniably so since its size is 45% smaller than that of a NanoSD. The manufacturer had the idea of ​​making it fit the exact dimensions of a nanoSIM. If only one telephone line is used – which is the case for the majority of Western users – the second slot can then accommodate an NM Card.

Complementary, not replacement (for now)

Huawei affirms it hand on heart: there is no question with the NM Card of wanting to compete with the MicroSD nor of keeping its exclusivity. “NM Card is a format open to all manufacturers who wish to use it,” assures François Hingant. At the time these lines are written, no manufacturer has officially expressed interest in the NM Card. In fact, Huawei is currently unable to tell us what form this opening to the financial side will take. However, it is very likely that the manufacturer will set up a royalty system. If so, let's hope it won't be too greedy so as not to discourage potentially interested industrialists. 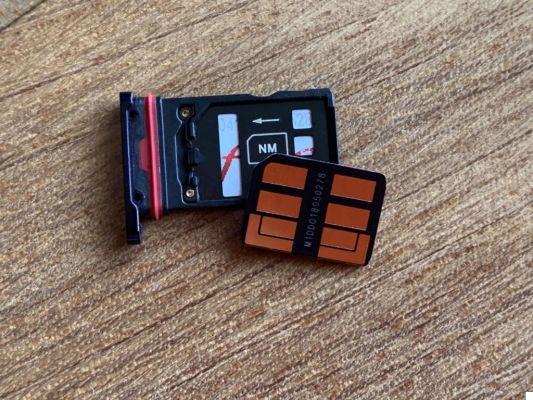 Could Huawei have its NM Card adopted by the SD Association as a successor to MicroSD? Technically, nothing seems to oppose it, the NM Card being technologically very close to the microSD. It remains to convince the SD Association and its members who might take offense at the initiative.

Attempts to replace the aging microSD are not new. We may recall that in 2016 Samsung Semiconductors announced the first UFS (Universal Flash Storage) memory card. It uses the microSD format (with different connectors), while being up to five times faster (up to 1200 MB / s for UFS 2.0). While UFS is already used in its embedded version in a growing number of products, the same is not true for its card version. And yet, the format has many advantages in terms of speeds, but also energy consumption.

The UFS Card is openly intended to succeed the microSD. In order to facilitate the transition, Samsung has even designed an internal player capable of accepting both formats. Whether it is the internal version or the card, the promotion of this promising standard is ensured by the UFS Association. It includes among others Microsoft, Samsung, Western Digital (parent company of SanDisk), Crucial and… Huawei.

Qualcomm meanwhile, supports UFS in addition to SD since the SnapDragon 835 (November 2016). To date, no consumer products supporting UFS cards have yet been announced. Does this mean that the market is not yet ready to accept a new card format? We can think so if we take the photography market as an example, where the main players are unable to get new high-performance card formats such as XQD adopted.

The UFS Card is positioned as significantly faster than microSD while maintaining the same dimensions. Huawei has chosen a different strategy by emphasizing the miniaturization of the NM Card rather than the increase in performance. Thus, its theoretical maximum read speed reaches 90 MB / s (identical to that of a good microSD) and therefore allows the reading of 4K HEVC video. No indication is given as to the write speed.

Of course, curiosity prompted us to test a 128GB NM Card. We measured a read speed of between 85 and 87 MB / s (so close to the announced figures) while the write speed is between 71 and 74 MB / s. We will therefore not encounter any bad surprises on performance, both in 4K HEVC recording and in playback. 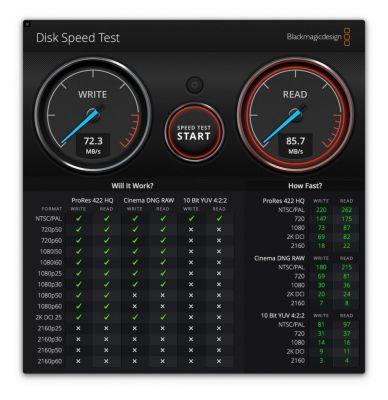 The most attentive of our readers will surely have noticed by examining the screenshot of BlackMagic Disk Speed ​​Test that we carried out our measurements on a computer. For this we used the NM Card adapter designed by Huawei which allows the card to be connected to a notebook via USB-C or USB 3.0. Also note that it is equipped with a microSD reader, to facilitate the transfer of files from one card to another. 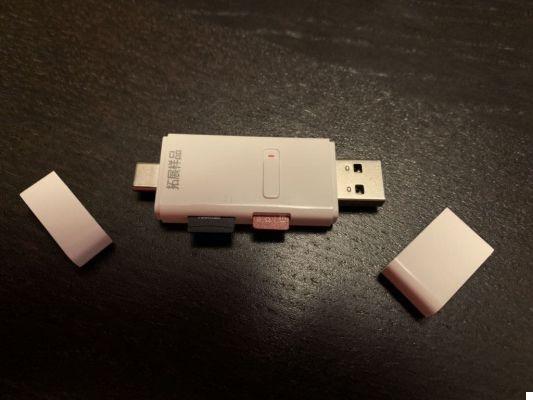 The adapter should be available in Spain for around twenty euros, Huawei not having been able to give us its final price for the moment.

The NM Card is available in three capacities – 64, 128 and 256 GB – but in fact, Huawei Spain only intends to distribute the 128 GB version, the only interesting one in its eyes. If we can at a pinch understand the absence of the 64 GB version, we tick a little face to the non-marketing of the 256 GB model. Huawei justifies this choice by the tax on private copying, the amount of which for such a capacity is deemed too high (€15,36 for 256 GB) to attract potential buyers.

This explanation, as understandable as it is, leaves us wondering since microSD cards are taxed in the same way and turn takers in Spain. Is it therefore necessary to understand implicitly that the selling price of the NM Card would be much higher than that of the microSD? Not really.

The official price of a 128 GB NM Card is €79 including tax., which is in line with the official prices of manufacturers like SanDisk for microSD of equivalent capacity and speed. As with microSD, resellers charge much more attractive prices. For example, it is possible to find the card at €51,47 on Amazon.fr, a price that we consider more reasonable. Surprisingly, Chinese sites like AliExpress currently charge a higher price than Amazon (€53,60, shipping included, but without taxes), but offer the 64 and 256 GB versions at 33,10 and 107,40 respectively. €XNUMX.

Audio Video Zoom: all you need to know about Huawei's NM Card
10 Chrome extensions for sharing links and websites ❯

add a comment of Zoom: all you need to know about Huawei's NM Card