WhatsApp formalizes Snapchat-style ephemeral messages, how does it work?

WhatsApp has just formalized the arrival of ephemeral messages. A feature familiar to Snapchat users. It is now possible to send messages that self-destruct after a certain time. 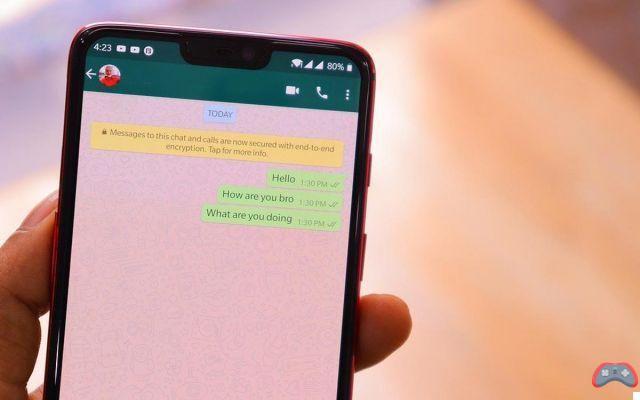 It has been several months since the feature was announced by the WaBetaInfo site, which over the months has become the ultimate source for discovering new features under development on WhatsApp. We knew that the application would soon allow to send ephemeral messages with the possibility of configuring a delay after which they are deleted from the conversation.

What use can that be? This is a privacy option that allows users to erase the traces of a message in case they don't want the recipient to keep it indefinitely. The message therefore self-destructs after a certain time. This possibility is in addition to the many features that WhatsApp already offers.

Ephemeral messages on WhatsApp: how does it work?

WhatsApp did not release a statement on the arrival of the ephemeral messages. It was through a support page posted on its site that we discovered how the new option works. “You can send messages on WhatsApp that will disappear by activating temporary messages. Once the feature is enabled, new messages sent in the chat will disappear after seven days,” the messaging app explains. Here's how to enable the feature.

The publication of the support page is a sign that the functionality will be available shortly. It also seems that the standard deadline is set at 7 days. We do not know at this time if it will be possible to choose a countdown of a different duration. A week is indeed long enough for an ephemeral message.

The ideal should be durations that can be counted in seconds or even minutes. WaBetaInfo advertised timelines of one hour, one day, one week, one month, and one year.

WhatsApp: ephemeral messages can be transferred

In some cases, messages that are supposed to self-destruct may still be saved on WhatsApp. This is particularly the case for quoted or forwarded messages. Indeed, when the user responds to you by quoting your message, an excerpt is kept in the discussion thread. But given the way quotes work on WhatsApp, you only read part of the message.

For transfers, on the other hand, “if a temporary message is transferred to a discussion where temporary messages are disabled, the message will not disappear from the discussion in which it was transferred”, specifies WhatsApp. Finally, with regard to particular case of photos, videos and voice notes, things are a bit more complicated.

The media you receive in WhatsApp is indeed automatically downloaded to the gallery. The photos will therefore disappear from the chat thread, but can still be recovered in the WhatsApp folder on your smartphone. There is another reason why this feature does not offer 100% privacy assurance.

Read also > WhatsApp: how to hide your private photos in the gallery

The recipient has the option of “forwarding or taking a screenshot of a temporary message and saving it before it disappears”. Avoid sending compromising messages and photos, as you are not protected against possible consequences.

Finally, many other features are in development and should arrive in the coming weeks. In particular, it will soon be possible to use the same WhatsApp number on several smartphones. The app is also preparing a feature to automatically clean messages to free up storage space.

It's easy to tell if a contact has blocked you on WhatsApp, but some indicators can also trick you into believing it unfairly. So how do you know… You sent a message by mistake on WhatsApp and want to delete it? It is quite possible as we explain in this tutorial. WhatsApp is full of features…WhatsApp now allows you to disable notifications from a conversation for life. Something to let you breathe when the latter are incessant. Here's how. Notifications are often abusive.…The photos you receive on WhatsApp end up in your gallery by default. But a very simple maneuver allows you to stop the automatic backup, which turns out to be very…

Audio Video WhatsApp formalizes Snapchat-style ephemeral messages, how does it work?
WhatsApp: you can now mute a contact forever ❯

add a comment of WhatsApp formalizes Snapchat-style ephemeral messages, how does it work?