6 ways to use the Chromecast that no one knows about 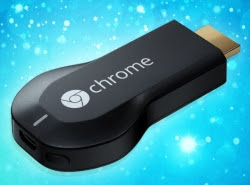 The inexpensive TV set Google Chromecast offers the possibility of viewing videos and photos from your computer, on TV, without having to use wires and cables, in an easy and immediate way.
We have seen in the guide to tricks and applications for the Chromecast many ways to use it, to broadcast movies on TV, even in streaming from the internet, to play games or to watch photos with friends.
To pick up on that article, let's see others here 6 lesser known Chromecast features, in some ways also very curious and useful, which may require some additional configuration, but which are within everyone's reach.

1) Turn on the TV without remote control
I recently discovered that the Chromecast can turn on my TV, so I can stream something from my PC or smartphone without having to use the remote to turn on the TV.
This works on all TVs that have a setting called HDMI-CEC, which can be activated from the TV options.
This function may have different names depending on the brand and can be found in the instruction book.
For example, on Samsung it is called Anynet +, Sony calls it Bravia Link or Bravia Sync, on LG it is called Simplink, Panasonic - Viera link, Toshiba - Regza link.
The Chromecast must then be connected to the power outlet via the power supply (and not connected to the USB port on the TV).
At that point, just start a broadcast from the application or Google Cast on Chrome to turn on the TV.
In another article, how to activate the HDMI-CEC function and why.

2) Use the Chromecast in the hotel
Chromecast cannot be used in a hotel room if the wifi connection is blocked.
It is therefore necessary to have a portable travel router, which can cost as little as 20 Euros and connect it to the ethernet socket of the room to create a connection between PC or mobile phone and Chromecast, to watch every movie without paying, via the internet.
In another article the guide to configure the Chromecast in the hotel.

3) Use Guest mode to connect guests without having to give them the wifi key.
If a friend comes to our house and wants to show us the vacation photos taken with their smartphone, they can show them to us on our TV equipped with Chromecast without having to connect to the home wifi network.
To do this, just enable the guest mode of the Chromecast.

4) Video Chat on the big screen
Thanks to the possibility of being able to broadcast anything you see on Chrome from your PC or Android smartphone, it becomes easy to project the video call window on TV from any app.
Casting to TV works best, of course, using the Google Hangouts video chat app which has the cast button to chromecast built in.

5) Listen to the TV sound with the phone earphone headphone to create a kind of wifi headphone
If you are watching a movie on TV using the Chromecast and casting from an Android smartphone or tablet, you can use an app called Localcast that allows you to watch videos from your PC (via SMB connection) or from the phone itself.
When you see a video with Localcast, it is possible to transmit the audio to the phone and thus obtain, through the simple earphone or normal headphones, hear the audio without disturbing those around, as if they were wifi headphones.

6) Connect the Chromecast to a stereo system to listen to streaming music.
Using streaming music apps like Spotify or Tunein from your mobile, you can connect the Chromecast to the stereo to hear it better and louder.
To do this you have to use a VGA to HDMI adapter with Audio adapter which should work (I haven't tried it myself, but I've seen videos and articles about it).