How are volcanoes formed?

Have you ever wondered how volcanoes are formed? Contrary to what one might think, 90% of these monsters capable of exploding and destroying entire cities are actually found at the bottom of the oceans. We will see in this file the reasons for their formation, their distribution and types, and their dangers. 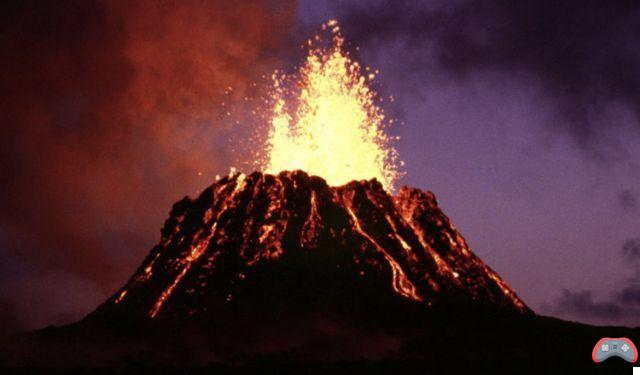 On our planet, volcanoes are formed due to the rise and accumulation of magma above the earth's crust, whether on land or at the bottom of the oceans. When we talk about magma, we are talking about partially molten rock, usually from the depths of the Earth's mantle, and more occasionally from the Earth's crust, heated by the friction of tectonic plates against each other.

The rising magma solidifies more or less quickly as soon as it comes into contact with the atmosphere or ocean water. Once cold, the solidified material, the basalt, can serve as a support for other lava flows. By accumulating between two eruptions, and despite the phenomenon of erosion, the volcanic cone is formed, and it can become very high, forming mountains and new islands that are not always stable (at least at the beginning).

Volcanic eruptions can be associated with more or less dangerous phenomena: toxic gas and ash releases, explosions with projection of rock and tephras, fiery clouds, lava flows causing fires, etc. The conical mountain usually formed by volcanoes is referred to as the caldera.

Why do volcanoes form?

In fact there are three places where volcanoes can form. In order of occurrence, these are the rifts where the tectonic plates are moving away from each other, the subduction zones where the plates, converging, pass one under the other, and strange zones which are called hot spots, or hot spots, often in the middle of plates.

There are still many things that are not known, including the exact reason for hot spots, the origin of which, deep under the Earth, is still difficult to study. For the two other cases it is simpler: on the rifts for example, the pressure of the magma pushes the plates to move away, and this space left “empty” is immediately filled with magma.

At the bottom of the ocean, this is manifested by slow lava flows which harden quickly, forming a kind of pillows and basalt chimneys. Rifts are mostly found at the bottom of the oceans. But because they cause the formation of large volcanoes, these sometimes outcrop on the surface to form islands. This is the case, for example, Iceland, traversed by many volcanoes. And there are visible traces of the rift that runs through the island.

Where are most volcanoes located?

In fact, it is often mistakenly thought that most volcanoes are on land. This is a mistake, since 90% of volcanoes are actually found at the bottom of the water, on oceanic rifts. Particularly in the Pacific Ring of Fire (75% of active volcanoes are found around the Pacific Ocean) and in the Atlantic on the ocean ridge.


Obviously, even though most volcanoes are found under the oceans, it is those on Earth that do the most damage. Thus Indonesia, the Philippines, Japan, Mexico, Ethiopia, Guatemala, Ecuador, Italy, El Salvador, Kenya or Iceland are regularly affected by eruptions (and earthquakes) . The consequences of an eruption can be extremely serious, especially in the absence of a warning system.

What dangers do volcanoes pose to their residents?

Volcanoes are associated with a series of directly or indirectly fatal phenomena. Thus, most of the deaths resulting from an eruption are due to the fiery clouds, landslides and famines and epidemics. To a lesser extent, although it necessarily depends on the area of ​​the globe we are talking about, the other big risk is that of a tsunami. Falling rocks, gases and lava flows represent a significant risk.

The fiery clouds are gray clouds made of volcanic gases and tephras (rocks projected by the eruption) at more than 600°C. They are often devastating as they hurtle downhill at several hundred kilometers per hour, sliding on the ground. They cross obstacles easily and it is therefore very difficult to escape them when one is unlucky enough to be in their path. These clouds form when a dome or needle lava.


In addition to these risks, that related to earthquakes is also potentially devastating, particularly in countries where anti-seismic standards are lacking or underdeveloped. To learn more about volcanoes and their formation, we recommend this video from C'est pas Sorcier on the subject:

The ice giants Uranus and Neptune are relatively little publicized. However, beneath the outer layers of these worlds may be hiding something spectacular: constant rain…Until now, we didn't know much about this extreme environment. But a new study reveals that under the thick blanket of ice, many species have been able to adapt to these…Elon Musk and SpaceX have faced strong criticism from China. Indeed, two of its Starlink satellites are said to have nearly collided with the…NASA has had an extraordinarily busy 12 months. During an 11-minute video, the American agency summarizes all the operations carried out during the year 2021… The video puts…

Audio Video How are volcanoes formed?
How to remove glare from glass? ❯