How to activate turbo in GTA

From Activation Trouble, we want to explain you How to Activate Turbo in GTA. If you want to learn how to use the Turbocharger or Nitrous Oxide in your Vehicle or Car in the Grand Theft Auto V Video Game or in Grand Theft Auto Online for PC, Xbox One or PlayStation 4 (among others), stay that we teach you the step by step to get it. 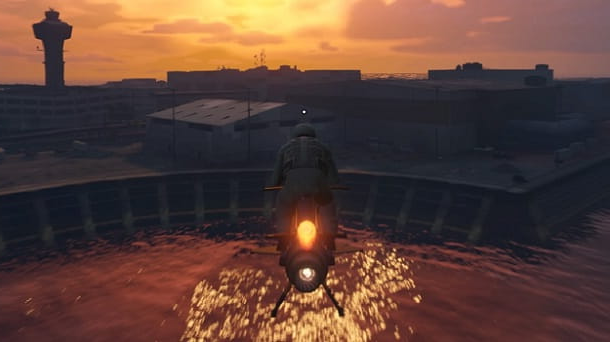 Before knowing in detail how to activate turbo in GTA, I think you may be interested in having a general idea of how this feature is managed within the famous title from Rockstar Games.

Well, in GTA Online/GTA 5 there are two types of turbo (also called nos, nitro or boost): theclassic one must be activated manually and thepassive one, on the other hand, is simply an increase in acceleration statistics.


This feature depends on the vehicle. Generally speaking, most vehicles have a passive turbo, but there are vehicles like the Oppressor MK II that have a default speed boost that the user must activate manually, similar to what happened with nitro in GTA: San Andreas.

In short, it's always good to know what kind of turbo your vehicle is using. In any case, don't worry: the aim of this guide is to analyze the topic as much as possible, so I will proceed below with explanations and practical examples in this regard.

How to activate the turbo in GTA 5

After giving you a general understanding of the types of speed boosts present in GTA Online/GTA 5, I'd say it's time to act. Below you will find all the relevant information.

How to activate the turbo in GTA 5 Online 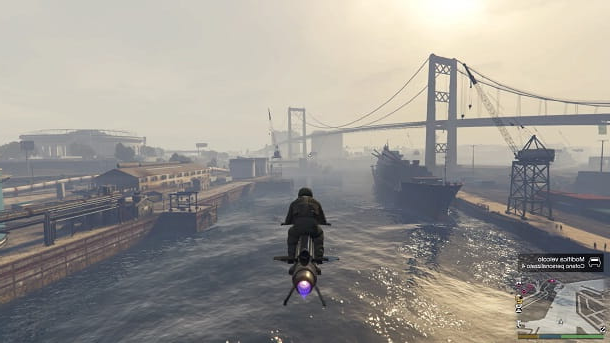 GTA Online, also known as the online mode of GTA 5, has undergone several updates over the years. For some time there has been a "mystery" surrounding the possibility of using a "speed boost", as it was not well understood whether Rockstar Games intended to implement it or not.


In the end, the developers have never released a feature that can turbocharge all vehicles, but several updates have introduced specific vehicles with "speed boosts", which may please those looking for that kind of experience.

One of the most interesting vehicles is theOppressor MK II. This is a very expensive flying bike (usually $3,890,250) that is a bit of a dream of every GTA Online player, as almost everyone is looking for it.

To use the "speed boost" once you are in the saddle of this vehicle, simply press the appropriate button for propulsion(the key to use is X on your PS4, X or E on your PC and on theXbox One isA). In short, the MK I Oppressor has a kind of "turbo" to be activated manually. 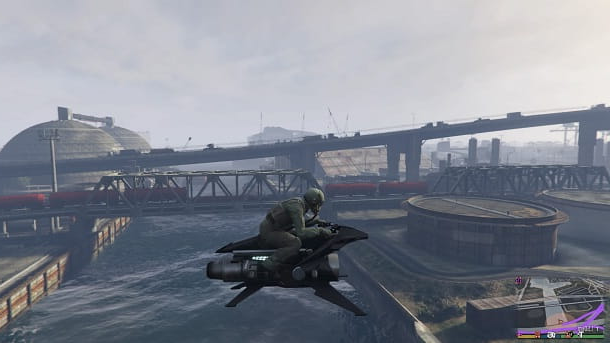 Then there are other vehicles that have a special ability called KERS (kinetic energy recovery system), originally introduced with the2015 success update and revived in the context of a minor 2020 update tied to that Diamond Casino and Resort released in 2019. This special ability, only available on certain vehicles, is very reminiscent of nitro from previous GTA chapters.


Among the vehicles that support KERS we find motorcycles likePrincipe Lectro andVindicator Dinka and cars likeOcelot R88 andProgen PR4. The key to use to activate the "speed boost" is L3 onPS4 (left analog press), LS onXbox One andX (or E) on PC. By the way, this special ability recharges when you release the throttle.


Another type of "turbo" that is activated manually is the one introduced by theArena War update, arrived at the end of 2018. In fact, the vehicles included in this update have what is called bypass boost, or a speed boost to the right or to the left.

In this case, if you are wondering how to activate the turbo in GTA 5 on PS4, you should know that you must hold down the X key and then useL1 or R1 to choose where to move the vehicle. On Xbox One, the buttons are instead A andLB/RB, while on PC it is X (or E) andleft/right mouse button.Boosts can be purchased inside theArena Workshop, which is the property that allows you to modify Arena War vehicles. 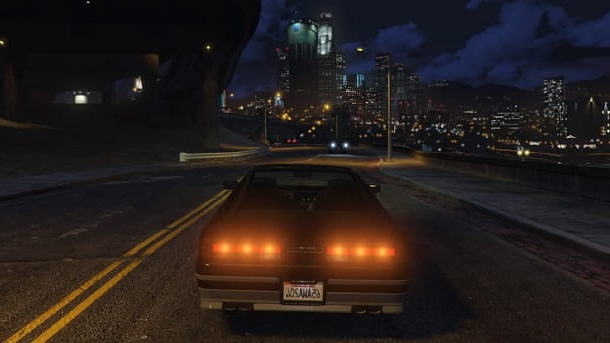 Otherwise, there are "normal Impulse" gods, which work just like the MK II Oppressor, which can be purchased through thesand shop via modification for vehicles like the steamy Apocalypse Imperator.


We should not forget the Voltic Rocket Coil, introduced in 2016 with theimport/export update. It is a futuristic car that has a turbo that works in the same way as the Oppressor MK II.

Another boosted vehicle is the Grotti Vigilante, which arrived in 2017 with thesmuggler update. Then we have thePegassi Oppressor, added with theweapons trafficking expansion in 2017, and the Declasse Scramjet (which arrived with the 2018After Hours update ). Thebuttons to activate the "speed boost" vary from vehicle to vehicle, but if you try the ones I showed you before, you shouldn't have any problems.


A small curiosity: in GTA Online there are 2 other very interesting vehicles, namely the Deluxo (car capable of flying introduced in 2017 with theexpansion The Apocalypse Strike) and the Imponte Ruiner (car capable of jumping and landing with parachute that arrived in 2016 with theImport/Export update). To use the unique features of these models, generally the buttons involved are X (PS4 / PC), E (PC) or A (Xbox One). 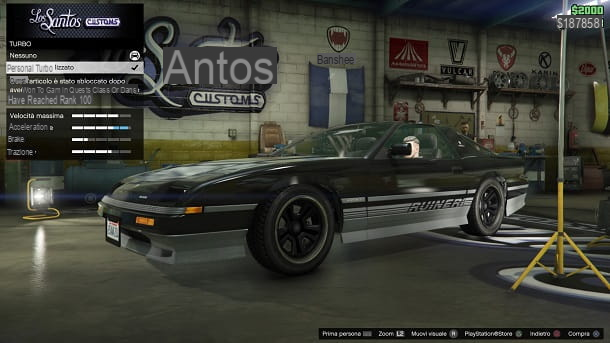 Otherwise, as mentioned in the introductory chapter, most vehicles in GTA Online can be modified with a passive turbo. In fact, going toLos Santos Customs, among the various modifications theturbo modification appears. This can be a bit confusing, as some might think that it is the same boost as the vehicles mentioned above.

In reality, this change simply affects theacceleration statistics of the vehicle involved, so you don't have to press any buttons to use it: simply, a vehicle modified in this way goes faster than it would by default.

How to activate the turbo in GTA 5 Story 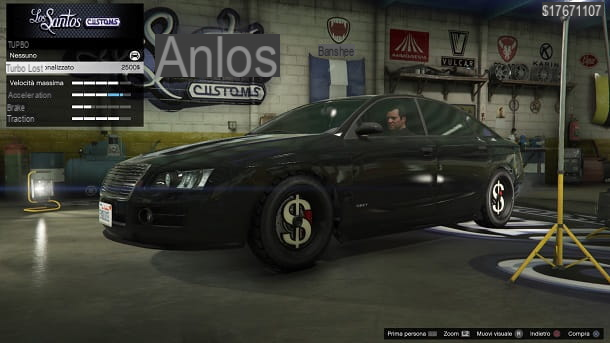 Would you like to activate the turbo in the story mode of GTA 5? Well, in this case you have to know that the possibilities are less than in GTA Online.

In fact, all vehicles in the online mode introduced through updates, they lack experience in the story mode of GTA 5. In addition, although there are vehicles such as Dinka Vindicator, their "speed boost" does not work.

Simply put, in GTA 5 story mode it is only possible to have the passive turbo, which is the one that increases thevehicle's acceleration stats (you don't have to press any keys to use it). You can buy it by going to any Customs in Los Santos and it is calledturbo in the game.

All in all, now you know everything you need to know about the possibility of activating the turbo in the Rockstar Games title.

What is preliminary information?

Preliminary reports are made after an investigation and before giving the final results.
At this stage, the data obtained are examined and evaluated to reach a conclusion, or it is decided to continue studying if the contributions are not conclusive.

What is a preliminary result?

Stage in which the user comes to the DNA to report an event, of which the ombudswoman determines whether it involves the rights of children or adolescents.

What is a preliminary study of a book?

Stud.
sys.
A smaller scale version of a planned investigation, which is used to test its suitability and design, and to identify possible drawbacks.

How to disable end-to-end encryption in Messenger?

Compilation of frequently asked questions that our users have sent us and that our experts have answered.

add a comment of How to activate turbo in GTA