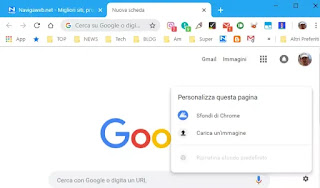 Google Chrome has updated these days to the version 69 carrying with himself visible changes to the interface, as had not happened for a long time.
Version 69 of Chrome is therefore a special update, also motivated by the 10th anniversary of the birth of the Google browser, which over time has become the most used in the world.
Chrome has therefore changed the appearance of the top bar of the tabs, the address bar (where you no longer see the initial part of the site addresses) and then also the new tab page, to which you can now change the background if you do not install themes other than the default one.

Chrome 69 is, therefore, one of the few versions of the browser that makes changes to the user interface on all platforms, including Windows PCs, Macs, Android and iOS.
The edges of the tabs have been rounded in Chrome 69, the profile icon has been moved from the title bar to the toolbar at the bottom, next to the extension icons, the height of the title bar has been slightly reduced in the new version .
The shape of our tabs has changed so that open site icons are easier to see, making it easier to navigate when opening many tabs.

Chrome's graphical interface can also be modified, compared to the current one, by changing a hidden option in the experiments page that brings optimizations for touch screens.
You must then open a Chrome tab and paste this address chrome: // flags / # top-chrome-touch-ui
The option called Touch UI Layout allows you to activate an interface optimized for touchscreen and convertible screens (Chrome OS)

The Enable option should activate the latter and display theChrome interface.
The Normal option, on the other hand, brings Chrome back to the way it was before the update.
Each option can be tried without problems, although to apply it you need to press the key that restarts Chrome.
It must be remembered that these options, like all those on the Experiments or Flags page, can be removed from Google at any time.

As regards, however, the graphics of the new Chrome tab, the one with the search bar and the most visited sites, you can change the background by changing the theme. You can activate a custom theme by going to the Chrome settings, under the Appearance> Theme section and you can install a new theme on Chrome by going to the Google Chrome web Store.
As we know, it is also possible activate the dark theme in Chrome.
To top it off, the new Chrome also has a new one graphics of how favorite sites appear on the new tab, which are now shown with icons and which can be added and customized.
The new tab shows the icons of the most visited sites and the ability to pin other favorite sites to the page by pressing the + button.
The sites already present can be removed or changed in name using the menu with three dots that appears when you move the mouse cursor over it.

ALSO READ: 10 Chrome Themes to change look and customize it

add a comment of Activate the Chrome touch interface