Before getting to the heart of this guide and explaining, in practice, how to disable Play Protect on Android-powered smartphones and tablets, let me give you some more information about this tool.

In fact, Play Protect is a safety mechanism, integrated and active “as standard” on the vast majority of devices equipped with the Android operating system (and Google services, of course), aimed at protecting the device and related data from potentially harmful applications, in multiple ways.

To begin with, Play Protect performs a security check on the apps in the Play Store, immediately before their download; moreover, it periodically checks for the presence of harmful apps coming from sources outside the Google "market" and, if the verification gives a positive result, it reports them. If the apps in question are already known, the tool automatically deletes them (then sends a notification about the operation just carried out).

Malicious applications such as those just described are generally not available on the Play Store, as they are discarded during the control phase (even if some episode of distraction by "Big G", in this sense, has occurred in the past) . However, Play Protect is also able to analyze apps downloaded in APK format, regardless of the market they come from.

I also want to clarify that Play Protect only carries out the control and removal of harmful apps, but it does not prevent you from downloading applications from sources outside the Play Store; therefore, if you want to install apps from unknown sources (an operation that I do not recommend you do, in any case), you do not necessarily have to disable the Play Protect protection, but rather act on the appropriate item in the Android menu. Play Protect only analyzes and checks the apps downloaded during installation, blocking them if they are harmful.


In light of what has been explained so far, personally, I advise you not to disable the Play Protect protection, since the latter operation could seriously jeopardize the information residing on your device, unless you know exactly what you are doing and are absolutely unsure of the good quality of the apps you will install once that system is disabled. Understood? Well, then let's proceed.

How to disable Play Protect on Android 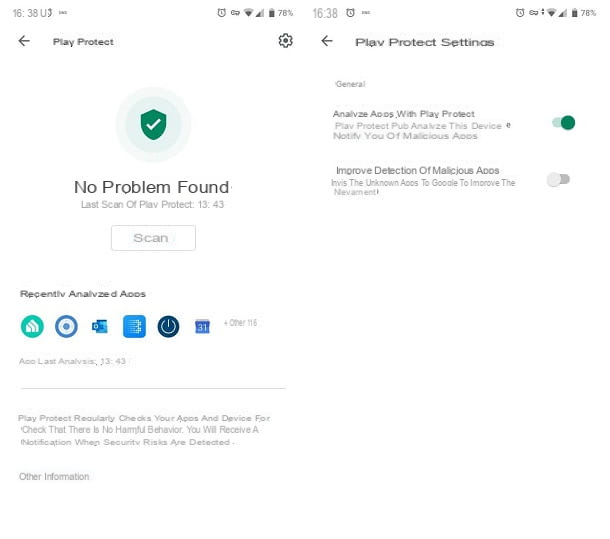 How do you say? You are well aware of the risks you face and you want to know the same how to disable Play Protect on Android? If so, let me tell you how to proceed.

First, reach for the Settings of the operating system, by tapping on the icon in the shape ofgear which resides on the Home screen or in the app drawer, go to the section Safety and location and tap on the item related to Google Play Protect. Alternatively, you can reach the same menu by starting the Play Store (the symbol ▶ ︎ colored), by tapping the button ☰ located at the top left and selecting the item Play Protect from the displayed panel.

The main screen of the Google antimalware, as you can easily see, shows a summary of the security problems identified on the device, together with the icons of the apps analyzed most recently; when you see it, touch the symbol ofgear located at the top right, in order to access the utility settings.

If you want to completely disable the security system, move to OFF the corresponding levetta alla voce Analyze apps with Play Protect e tocca il pulsating disable, to complete the operation. To prevent installed unknown apps from being sent to Google's servers (for the purpose of improving malware detection), move to OFF the levetta relative alla voce Improve detection of malicious apps.

I recommend: immediately after carrying out any operations that Google's anti-malware could have prevented, reactivate it: to do so, go back to the menu Settings> Security and location> Play Protect of Android, tap the rotella d'ingranaggio located at the top right and move up ON l'interruttore situato accanto alla dicitura Analyze apps with Play Protect.

Other ways to disable app control 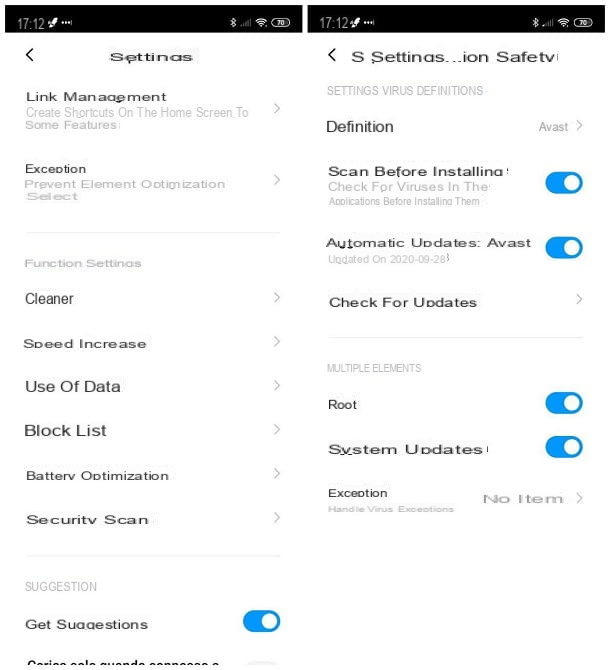 As an added security measure, some versions of Android heavily customized by manufacturers (such as the MIUI of Xiaomi One UI di Samsung or the EMUI di Huawei / Honor) alongside - or replaces - Play Protect with a proprietary security system, able to check the quality and integrity of the apps and, if these are harmful, to promptly block their installation and / or execution.

It goes without saying that if you need to install an app that is not "frowned upon" by certain protection systems, you will have to deactivate those in advance. Generally, the option to do this is found within the integrated security panel on the device, which is called Device Service / Device Maintenance, on Samsung and di terminals Optimizer / Phone Management on those Huawei and Honor.

On Xiaomi devices, however, it is possible to manage the app control settings using the utility Safety, which can be called up using the dedicated icon (in the shape of green shield) resident in drawer of MIUI: once the aforementioned app has been opened, touch the symbol of thegear at the top right, select the item Security scan from the proposed menu and move to OFF the corresponding levetta alla voce Scan before installing.

Also in this case, my recommendation is not to proceed with the deactivation of the scanning on the apps for security reasons or, if it is really necessary, to enable it again as soon as possible: then do not tell me, even in this case, that you do not I warned!

97%
We have been able to provide in 97% of times, the solutions that users were looking for when consulting our page.