How to unblock Adobe Flash Player on Chrome, Firefox and Edge 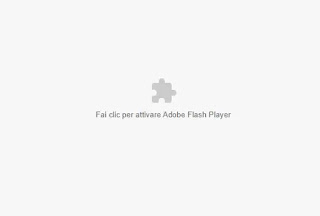 Adobe Flash has been the most used technology by websites for many years to show animations, to stream video and to create online games. Due to maintenance problems, caused by the numerous security flaws of the Flash plugin, and with the arrival of HTML5 technology that allows you to do the same things without the need to add external plugins or programs, the development of the Flash Player has been terminated by Adobe (final deadline is January 2022) and previously blocked by many web browsers, including Firefox, Google Chrome and even Microsoft Edge.
The result of this block led developers to abandon Flash for new websites and online games; the problem is that there are still many sites still in Flash, many interesting and still useful web applications to use and the vast majority of browser games, which are all in Flash.
It happens, therefore, that when you open a website with a flash content, a white box appears with the writing Flash is blocked on it (Adobe Flash Player is blocked or Adobe Flash Player is blocked) or, on other sites, a button that says Install or Enable Adobe Flash Player or Click to activate Flash Player, which if clicked does nothing.
For every time you open a site in Flash, to play the old ones again Flash games (if they haven't been converted to HTML5 yet), then it's important to know how to unblock Flash on major browsers, namely Chrome, Firefox and Edge for Windows PC, Mac and Linux. We will also see a free program that allows you to play Flash games without using a browser.

ALSO READ: Best Flash and HTML5 sites, the most beautiful, animated and interactive

How to unblock Adobe Flash in Google Chrome


In Google Chrome, every Flash content or game no longer runs. When a light gray box appears, an icon in the shape of a puzzle and the words "Click to activate Flash Player" or Adobe Flash is blocked, if you click on the message or on the puzzle, nothing happens and the flash logo appears. To unblock Flash Player on Google Chrome it is necessary, first of all, download Ruffle, a plugin that revives Flash on browsers. Once installed, when you open a site in Flash, it can be unlocked by pressing the Play button that appears (which allows you to run the Ruffle plugin).
The methods below explained how to activate Flash when it was still installed on your PC, today they are still useful in case you are having difficulty unlocking Ruffle.

Method 1:
Click on the puzzle piece icon
Notice and click on the puzzle icon on the address bar, small one, on the right side.
Click on Manage
Press the switch Block sites from running Flash (recommended) to activate it and notice that the writing changes to Ask first .
Go back to the site with the Flash box blocked and press again on Enable or on the puzzle icon.
Now click on Allow at the top left.
The site reloads and this time showing the game in Flash.

Method 2:
If nothing happens when you click the puzzle design on the blocked site, press the button with three dots at the top right and then open the Settings
Click on Privacy and Security on the left side.
Click on Site Settings in the center of the page.
Scroll down and click on Flash
Turn on the Block sites from running Flash switch (recommended)
After saving this change, instead of automatically blocking access to Flash content, Google Chrome asks for permission to run the content. You can then press on Allow to unlock Flash.
If you click on Deny, the site will be considered blocked and can be unblocked by opening Chrome Settings> Site Settings> Flash and deleting it from the list of blocked sites.

ALSO READ: How to Activate Flash on Chrome

How to unblock Adobe Flash in Microsoft Edge

Microsoft Edge is the default browser in Windows and is the preferred choice for many users. Like Google Chrome, it automatically blocks access to Flash content and games. To unblock Flash in Edge, the procedure is the same as in Chrome.
When you visit a site that uses Flash, a window appears stating that Adobe Flash has been blocked. When this message appears, even clicking on it nothing happens. However, you will notice, at the top of the address bar on the right side, the small puzzle icon with a red cross on it. Press on this icon and then go to Manage.
On the settings page, enable the option Ask before Flash (recommended disabled).
Then go back to the game or Flash site and reload it.
This time, you can click the gray box with the puzzle design.
After clicking, click on Allow top left.
If you want to change the option to unblock Flash in Edge, press the key with three dots at the top right, then open the Settings and go, in the left column, to the Site permissions section.
In the center of the page, click on Adobe Flash and activate the option Ask first ....
Here too, as in Chrome, the allowed and blocked sites are listed in a list from which they can be removed by pressing the trash icon.

How to unblock Adobe Flash in Firefox

Unlike Chrome, Firefox has no built-in Flash. To make Flash work on Firefox you need to download the latest version of Adobe Flash Player and install it on your PC.
Once installed, you can open a site or a game in Flash with Firefox to see the box with the usual puzzle icon and the words "Run Adobe Flash".
Click the Run Adobe flash box and then press the button Allow top left.
If Flash is blocked or if you want to change the default option of "Ask before running" in Firefox, you have to press the button with three lines at the top right and go to Add-ons.
Then click on Plugins to see the external Firefox plugins and notice that there is Shockwave Flash.
Press the button with three dots next to Shockwave Flash and then choose the option Ask before activating or Never activate. In the latter case, the Flash content box will not be clickable.

Play Flash games on PC without a browser


The program Flashpoint, for Windows, Mac and Linux, is a web game preservation project that supports content made in Adobe Flash, Adobe Shockwave, HTML5, Java, Unity Web Player, Microsoft Silverlight, ActiveX, and other web plugins that are no longer used today. The project includes three main components: a web server, redirector and launcher. All of these work in combination to create the illusion of accessing Flash content (and other technologies) on the Internet. Flashpoint offers everything you need to play classic web games. It has a library of around 38.000 web games and 2.400 animations. With FlashPoint, all Flash games will still work even after support is permanently terminated and Flash has disappeared from browsers and Windows.
Alternatively, you can also Download and play Flash games on your PC.

NOTE: Adobe announced that at the end of 2022 it will stop Adobe Flash support and Microsoft Flash Player will be automatically removed from Windows via an update. Flash can still be used (perhaps with some changes to this guide)

Finally, remember that you can still view Flash sites on Android and iPhone with a little trick.

add a comment of How to unblock Adobe Flash Player on Chrome, Firefox and Edge