No more blue screen of death: Windows converts to green 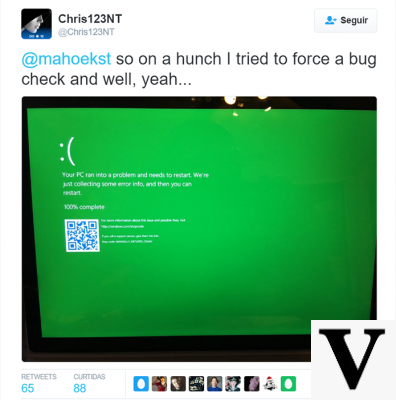 Green is the color of hope. And hope, you know, is the last to die. Perhaps also for this Microsoft decided to update his screen of death. No more blue, an identifying color as feared by users, in the event of a critical system error, but a more "hopeful" green.

Da Blue Screen of Death a Green Screen of Death. Blue Screen of Death is the name commonly given to the screen blue color shown by a computer with a Windows operating system when a critical system error occurs that cannot be resolved on its own. Microsoft has decided to display this page in green. To notice it was a user who posted the photo on Twitter and the company, represented by its developer, confirmed the color change. This change is currently visible only Windows 10 Insider Preview Build 14997, the latest preview version of Creators Update.

Will there be other news?

The choice of green is not casual or aesthetic. Microsoft is testing this color because it might help users to immediately understand what it is and identify error reports immediately. In addition, in this way, based on the color shown, they will be able to recognize whether it is a definitive version or one related to Windows Insider. The death screen has gradually evolved and now also features a QR code that can be used to go directly to a support page. But this is not the only surprise of the new version. Microsoft is also testing a "night mode" which decreases the amount of blue present in the screen to relax the eyes in case of low light and then also a "game mode". This, as the name suggests, increases the performance of the device when we play.

No more blue screen of death: Windows converts to green

add a comment of No more blue screen of death: Windows converts to green