The safest browser: comparison of Chrome, Firefox and others 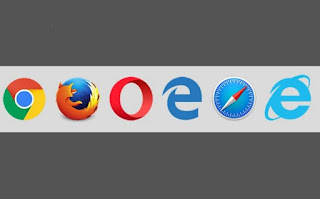 The browser, that is the program for opening websites, is the computer application most exposed to the outside world.
The web browser can be seen as a window to be used to look out and out into the world and look outward, but it can also be used by thieves and criminals to enter our home.
For this reason the browser must be a very strong security program, to prevent unauthorized intrusions from the outside.
So you just have to go to the wrong site or click on a hijacked link to end up infected with some malware, which can steal personal data or spy on everything we do.
So even before any antivirus, the browser itself must have its own internal protection against the most widespread threats and prevent the download of infected files or the execution of scripts remotely (from the sites visited) that could hijack navigation.

Taking the most used browsers in the most recent security tests, especially those of the competition between Pwn2Own hackers (where the winner is the one who finds more vulnerabilities still unknown) and those of the BrowserScope site, we can make a security comparison between Chrome, Firefox, Edge, Opera, Safari and Internet Explorer
BrowserScope it is also an online benchmarking tool that does a check on browser security testing some parameters and forcing the most common attacks on the internet.
Un another test to check the security of the browser and the browsercheck di Qualys which however uses a plugin to install.
Nice test to check if the browser configuration is unique to Panopticlick: the more unique it is, the harder it is to trace.

Wanting to make a brief summary of the various test results, with reference to the most used browsers, we can now conclude that the safest browser in 2022 is Chrome.
Google Chrome seems to be the best choice for security today, thanks to its rendering engine and, above all, the speed with which Google releases patches to fix newly discovered vulnerabilities.
Firefox it seems far behind in this respect and remains hackable in several ways, at least according to the reported sources, but Mozilla is still quick to fix the vulnerabilities.
Opera that's fine, also because it's based on the same engine as Chrome, as well as it's safe too Safari from Apple, much improved from a security point of view.
Microsoft Edge instead it seems to have some security problems perhaps due to the youth of this browser.
We should forget, however, Internet Explorer, which now seems too old-fashioned to support a comparison of this kind.

Going deeper in finding out which browser is more secure, let's find out some more details on the comparison between Chrome, Firefox and the others.

1) Google Chrome it remains the browser with the best reputation from a security point of view, especially thanks to its powerful sandbox function, ie the ability to keep the browser in an isolated environment from the system.
Furthermore, Chrome has almost total plugin blocking, avoiding the dangers of external plugin vulnerabilities such as Flash, which is the only one left, but which is integrated into Chrome.
Chrome Safe Browsing blocks dangerous sites in a number of ways
As mentioned above, Google is the company that responds fastest when security problems are found, releasing patches immediately.
The only weakness can be Chrome Web Store applications and third-party extensions, which could always be maliciously designed.
While Chrome can still be considered a secure browser, the problem is in managing privacy, which is a different thing than security.
It goes without saying that Chrome is an important means of collecting information for Google, albeit anonymously.
In another article we talked about the Privacy settings in Chrome on purpose.

2) Mozilla Firefox it has lost a bit of its reputation in recent years in terms of security, so much so that at the Pwn2Own contest in 2022 it was out of competition because it was considered too easy to hack.
Basically, Mozilla hasn't made any adequate security enhancements to its browser recently.
One of Firefox's biggest flaws is that it doesn't use a sandbox to keep the internet separate from the system (it has a sandbox just for plugins).
For Firefox it seems that the time has come for a turning point if it does not want to completely lose its future, even if for now it is still considered reliable.
Firefox's strong point is its privacy, with Mozilla collecting only a few user browsing data and not selling it for advertising purposes.
Firefox is also completely open source, which is always a welcome and unique feature among the most popular browsers, and it means that anyone can open its source code and make sure on their own that there is no problem inside.
In another article, Firefox's security and privacy options.

3) Opera has been revolutionized in recent years with respect to its origins, becoming a browser based on Chrome, which guarantees full architectural security.
In addition, Opera is updated at the same pace as Chrome, never falling behind in fixing vulnerabilities.
Opera is also very safe because it is used by few people, thus remaining in the shadow of the activity of hackers who prefer to concentrate their efforts on the most popular programs.
All in all, thanks to the introduction of tools such as Opera's VPN and support for Chrome extensions, it is a browser to recommend for those who care not only about browser security, but also the privacy of browsing data.

4) Microsoft Edge, available only on Windows 10 where it has replaced Internet Explorer as the default browser, it is a completely new browser and different from the others, very fast even if a little limited in its functions.
Edge uses a sandbox to isolate the Internet from the operating system and make intrusion attempts more difficult.
In the last 2 Pwn2022Own contest it went very badly, perhaps because it is still young and because, being based on Internet Explorer, it suffers from some of the same vulnerabilities.
When it comes to privacy, Edge has the same problem as it does with Internet Explorer, which is the fact that it is completely closed source and built by Microsoft which certainly collects browsing data.

5) Safari, the Mac browser (Safari on Windows hasn't existed for years), works well and is well protected against attacks.
The problem for Safari is not the fact that it is the only popular browser to use the WebKit engine that was abandoned on Chrome a few years ago, but the fact that it is also closed source and belonging to a company that must maximize the profits.
Like Microsoft Edge and Chrome, it cannot be ruled out that Apple uses their collected data for its market research.

6) Internet Explorer now it should no longer be used because it is almost abandoned by Microsoft, even if the latest version, 11, is still updated with security patches.

Finally, to enforce the security of each browser, there are several extensions that you can install and we have seen two important lists in other articles with security extensions for Chrome and extensions to make Firefox more secure.
Finally, don't forget that 64-bit version browsers are always safer than 32-bit ones.

ALSO READ: Which browser is best at protecting online privacy

Chromecast doesn't work or jerks: how to fix ❯

add a comment of The safest browser: comparison of Chrome, Firefox and others