Update Windows 10: how much free space on the hard disk? 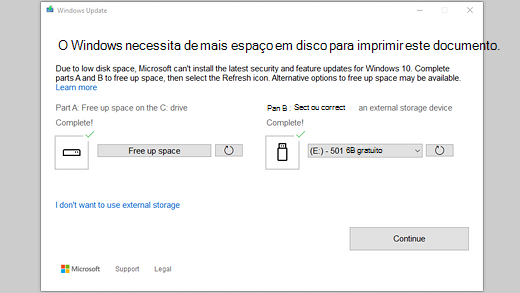 As widely expected and already announced several months ago, the next Windows 10 update will take up more space on our hard drive. Much more space than before, much more space than was even assumed. If initially there was talk of 7 GB of space "stolen" by Windows, the latest numbers are much higher.

The confirmation came from a recent update to the minimum system requirements to install Windows, in which Microsoft announces that starting with version 1903 of Windows 10 you will need to make space on the disk. Until the previous six-monthly update, the unfortunate October Update of 2018 which brought the version of Windows 10 to 1809, to install Win 10 32-bit 16 GB of disk space were needed, for the 64-bit version 20 GB were needed. For the 32-bit Enterprise version, 16GB was needed, and for the 64-bit Enterprise, 20GB of disk space was needed.

How much space do you need for Windows 10 version 1903

Starting with version 1903 of Windows 10 (expected release: end of May 2019) the new free disk space requirements are as follows:

As you can see immediately, therefore, apart from the two Enterprise versions that have remained unchanged, both the 32 and 64-bit versions of Windows 10 1903 they will require much more disk space. Compared to the previous version 1809 it goes up by 16 GB for the 32-bit operating system and 12 GB for the 64-bit one. All other system requirements, however, remain unchanged.

For all Windows users who have a not very large disk, such as an SSD, having 12 or even 16 GB less space is a bit of a hassle. But, paradoxically, the pros could be more than the cons: up to version 1809 of Windows 10, in fact, Microsoft's operating system has shown several problems when disk space starts running low. On version 1809, for example, many users have complained about drastic slowdowns of the operating system when running out of space. For this reason, therefore, Microsoft has decided to "play in advance" reserving a larger slice of the main disk in order to limit (or postpone? Who knows…) the problems for users.

Update Windows 10: how much free space on the hard disk?

add a comment of Update Windows 10: how much free space on the hard disk?