What to do if the internet says "Congratulations You Won"; how to avoid or block it 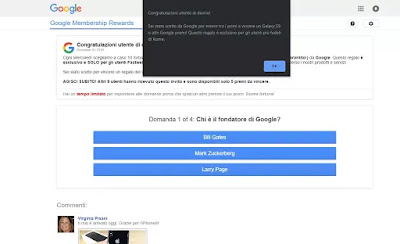 One of the most frequent problems is that of scam advertisements, the maximum expression of which is the sudden appearance of a web page or a popup that warns the user that he has won! Usually, this page looks festive, with a variable message which can be: "Congratulations, you have won!"or"You have been selected"or"Congratulations, you are the millionth visitor","you have won an iPhone or a Samsung Galaxy"and so on. The popup is also often personalized and even if it does not write our name, it can understand where we are connected from, with which internet provider (it may be that the message speaks of a loyalty reward to Fastweb customers), with what type of computer or smartphone, with which browser and from which search engine (in the figure above there is a clearly fake Google award). There may also be fake comments at the bottom that try to make the page look like The worst part is that they often have a button to press to redeem the prize which can lead to taking a survey, filling in personal data or downloading a file that is always malware.
Before understanding whether it is possible to remove this type of message, it is important to note that it always comes, without a shadow of a doubt and without any exception, of a scam. There is no chance that a website can give us something by chance just for clicking a link. If it sounds too good to be true, it probably isn't, and in this case it's not XNUMX percent true.

What are "Congratulations You Won!" Popups?

Searching the internet solutions to avoid running into this message, you could find guides and tips on how to remove these popups by downloading programs that if they are not scams, we are close. In fact, in fact, in most cases the appearance of "You Won" popups in the browser of your phone or computer it is not related to the presence of malware. There is, therefore, a problem with the phone or the web browser, the problem, however, is the web page or the link that was clicked. Within that site that was being viewed, there was code that led to the new page with the scam message. This is the typical "redirect", ie the automatic loading of another page than the original one.
This type of scam appears mainly from smartphones, especially from iPhones, but it also happens in the web browser of a Windows PC or a Mac. The strange thing is that, at times, it also appears when opening popular sites such as Repubblica, Corriere or Gazzetta

How to remove "You Won" ads

Now that we know what they are generated from, we can well guess that removing them entirely is practically impossible. The problem is with the website you visit and its code, so it's not possible to fix it, only the site owner can.
Theoretically, however, this shouldn't happen very often, unless you click random links on Facebook or other social networks. In any case, whenever this popup appears, close it immediately by going back, absolutely without clicking any buttons or links inside it. Sometimes the "back" button on the browser may not be enough (because returning back to the site with the redirect code) and you will have to close and complete the tab. Also be careful not to be fooled by false close buttons and, in the case of particularly persistent pages, closing the browser could become the only solution.
If you are experiencing this type of redirect on a website that you are familiar with and have always behaved cleanly, you could contact the site owner and report the problem.
Blocking the advertisements might be the most obvious solution, but then, you would have other problems, since the blocks could also interrupt the navigation on some sites and prevent them from functioning correctly.
The best thing is, of course, that of ignore these scam pages when they suddenly appear, both those in which it is said that we have won, both those that say that our PC is infected, both those that say that to see a certain video you need to download a plugin or register on the site, and those that ask to activate notifications and etc.

In case the Congratulations popup shows up often, then there may also be a problem on your PC or phone.
On a PC, this can be easily solved by doing a malware scan with MalwareBytes and an adware scan with ADWCleaner, one of the best tools for removing malware hijackers that make site redirects.
On Android smartphones it is possible, if you are unable by yourself, to use an antivirus app to remove malicious apps.
On iPhone, Android and PC it can be useful to clear the cache of Safari or Chrome browsers, to get rid of harmful cookies or other codes that can lead to the frequent appearance of pop-ups.
Finally, it is important to know how to block automatic pop-ups and redirects on Chrome and Firefox.

ALSO READ: If a site gives an error or opens a different page, solutions to "browser hijacking"

add a comment of What to do if the internet says "Congratulations You Won"; how to avoid or block it