Windows 10, a new bug does not allow you to connect to the Internet 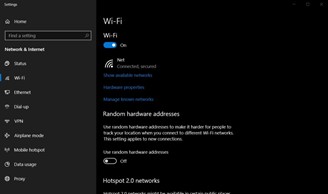 Il Patch Tuesday in July, second major security update after the arrival of the May Update which he brought Windows 10 to version 2004, continues to cause problems for users. The last report concerns the difficulty, or even the inability to connect to the Internet after updating the computer.

Users who are experiencing these problems, which are very variable as always happens with bugs brought by a Windows update, are complaining on Microsoft's official forum. The company acknowledges and takes note, but as usual the solution of this problem is postponed to a future cumulative update. In the meantime, however, there is already a do-it-yourself solution to solve the problem. But it is a fairly delicate maneuver, because it involves intervention on the Windows 10 registry. For this reason, it is better to be sure that the problem our connection is suffering from is precisely the one described in the last hours by users.

This bug brought from the Patch Tuesday July 2020 on Windows 10 it's very curious, because it's actually a fake bug but it brings real problems. In practice, users claim to see, for no reason, the famous yellow triangle in the Start menu bar. Triangle which, when visible instead of the normal Wi-Fi symbol, indicates that the connection has some problem. The problem in question, according to Windows, is precisely the inability to connect to the Internet: the router works, the PC hooks up to the Wi-Fi network, but then fails to connect to the web.

But in reality it is not true: if you open any browser, the connection is there and you surf without problems. The problems, however, are there with certain apps like Spotify that "trust" connection detection for understand if the PC is connected to the Internet or not. These apps are "tricked" by the bug and consequently don't work.


Windows 10 won't connect: how to fix

While waiting for Microsoft to insert a patch for this strange bug in an upcoming cumulative update, it is possible to fix it with a maneuver on the system registry. It is necessary to open the registry editor (just search for "RegEdit" in the Start menu) and then open the folder tree until you find "HKEY_LOCAL_MACHINE SYSTEM CurrentControlSet Services NlaSvc Parameters Internet", where we can select the key "EnableActiveProbing". having opened this key to modify it we must change the value from 0 to 1. Usually this is enough to make the yellow triangle and all the problems that arise from it disappear.

Windows 10, a new bug does not allow you to connect to the Internet

Audio Video Windows 10, a new bug does not allow you to connect to the Internet
Windows 7, antivirus support continues for two years ❯

add a comment of Windows 10, a new bug does not allow you to connect to the Internet