Windows 10, how to fix all the problems of the latest update 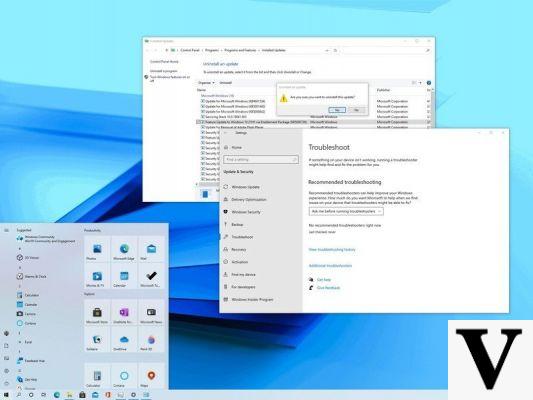 Il May Update, first half-yearly update of Windows 10 per il 2020, has not yet been downloaded and installed by all users but there are already several problems. Reports occurred both on Reddit and on the forums, including the official Microsoft one.

Like any small and large update to Microsoft's operating system, therefore, even the May one is not at all perfect nor compatible with all the millions of possible hardware and software combinations present on desktop PCs around the world. Some of problems are serious enough, others are just annoyances, but the substance is always the same: Microsoft has not been able, for a long time now, to publish stable and reliable updates. Release the update first, then log known issues, and finally release other updates to fix the problems caused by the previous update. A scene already seen, now thousands of times.

Windows 10 May Update: the most common problems

Some of the bugs in the latest update are serious and cause famous blue screens, the Blue Screen of Death (BSOD) that appear when Windows crashes and needs to be restarted. BSODs are reported due to incompatibility with some network cards, some Thunderbolt docks, and even some driver versions for graphics cards with Nvidia GPUs. Minor problems concern gaming: with Intel video cards the variable refresh rate no longer works, while on some games the mouse freezes if the GameInput Redistributable function is used. Compatibility issues also with some drivers for Synaptics ThinkPad UltraNav pointing devices of Lenovo laptops. Finally, some cards with AMD GPUs are no longer compatible with the Movies & TV app after the update.

It is clear that, with so many and such a variety of problems, it is impossible to find a single solution, unless one is willing to uninstall the May Update. The latter solution, at the moment, is the only one available in some cases of BSOD. In other cases it is enough update device drivers that conflict to resolve the problems caused by the May Update. It all depends on the severity of the problem, therefore, since Microsoft is usually not very quick to fix bugs caused by its updates.

Windows 10, how to fix all the problems of the latest update

Audio Video Windows 10, how to fix all the problems of the latest update
Windows 10 Creators Update arrives on April 11: what it is and what changes ❯

add a comment of Windows 10, how to fix all the problems of the latest update