Windows 7 has a bug: Google invites you to upgrade to Win 10 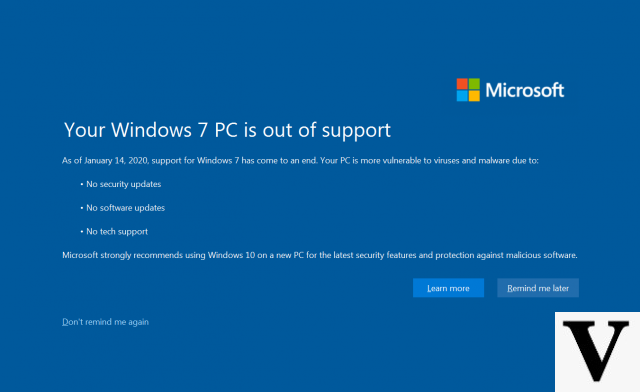 Dear users, Windows 7 is no longer secure and you should consider upgrading your PC to Windows 10. To say it is not Microsoft but Google. The online search giant, in fact, also has a large group of cybersecurity experts who, to the umpteenth leak discovered in the old operating system of the Redmond house, have raised the alarm.

The new flaw discovered by Google technicians is quite serious and it affects some Windows 7 kernel files. If a hacker were to take advantage of the vulnerability, he would be able to both bypass the sandbox that protects user activities and gain system administrator privileges. In short, a rather serious bug, which could allow cybercriminals to take possession of your Windows 7 PC and spy on everything you do. A bug, underline the Google experts, already used in the past months by hackers, who could continue to use it for who knows how long.

Why Google recommends upgrading to Windows 10

As has been known for some time, in fact, Windows 7 is not updated very frequently and, in less than a year, Microsoft will permanently discontinue support. This means that no updates will be released anymore, unless you feel like paying. Precisely for this reason Google recommends installing the new version of Windows: an operating system without updates is theoretically at the mercy of any hacker or hacker. Whatever flaw is discovered, in fact, will not be "plugged" and will represent a danger for one's data and for the integrity of one's computer system.

Also, as Big G's cybersecurity engineers explain, the vulnerability does not appear to be present in Windows 10. All the more reason to say goodbye to Windows 7 for good and switch to Microsoft's new operating system.

Windows 7 has a bug: Google invites you to upgrade to Win 10

Audio Video Windows 7 has a bug: Google invites you to upgrade to Win 10
Is Chrome Consuming Too Much RAM? Here comes the Windows 10 solution ❯

add a comment of Windows 7 has a bug: Google invites you to upgrade to Win 10