PS5: an AI will adapt the music of the games in real time to maximize immersion

Sony's PS5 could analyze player behavior in order to adapt the music in the middle of the game. A way to maximize immersion. At least that's what a patent filed by the Japanese firm that would seek to revolutionize soundtracks in video games suggests.

Could video game music adapt to our behaviors in the future? In any case, this is what this new patent filed by Sony and spotted by Game Rant suggests. If he doesn't specifically mention the new PS5 console, one can easily imagine that it could be used for these purposes. The patent, named “Dynamic Music Creation in Gaming” simply offers to adapt the tonality of the music in game and their rhythm according to the behavior of the player. This is to evolve the scripted changes that we already know.

This patent implies that composers will have to create leitmotivs adapted to each situation, environment or character. Sony's AI will therefore analyze all these musical patterns as well as player activities. The goal will then be to offer him music adapted to his rhythm. Let's take a concrete example: if the player stops for a long time to look at the landscape, the rhythm of the music will gradually slow down to speed up again if he starts running. Uplifting music could be played if a friendly NPC is encountered, and a faster-paced melody in the event of an action phase. A technique already used in all games, but in a scripted way.

The goal is not only to adapt to the movements of the player, but to create an emotion thanks to AI. Sony could also think outside the box. Indeed, the company indicates that putting on haunting rather than rhythmic music in stressful phases could have a “more interesting” effect. This new method would also make it possible to analyze the behavior of the players and to improve the music heard at such and such a moment for the next games. 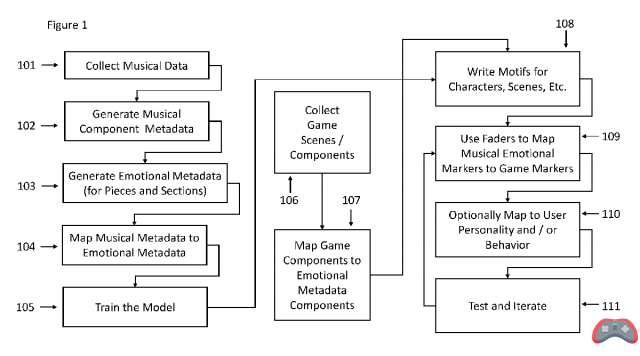 It should be noted this is just a patent. If Sony is thinking about this, it does not mean that this technology will be implemented in the PS5. This would lead video game composers to change their working methods. Developers also need to get up to speed. A complicated set-up for the appearance of technology as it is right out of the console.

Analysis of player behavior at the center of concerns

This patent is not the only one filed by the Japanese company. Not long ago, another, also relying on interactivity, had appeared. The latter evoked an AI that would analyze the behavior of the player to help him manage his time. Thus, it would theoretically be possible to see how long the next quest would take to complete. Likewise, this same patent could help the player if he is in difficulty. If the two repositories have nothing to do with each other, we note all the same that the interactivity and the analysis of in-game behavior are at the heart of Sony's concerns.


This aspect could be at the heart of how the PS5 works. If we already know a lot of technical details of the console, everything related the user experience is for the moment very mysterious. Sony could hold a conference next week to tell us more. In addition to this aspect, the manufacturer could reveal the design of the console, its ecosystem, but also the first games.

The PS5 is slated for release at the end of 2020 at an as-yet-unknown price. In the meantime, the PS4 still has plenty to keep players busy, with The Last of Us 2 scheduled for June 19 as well as Ghost of Tsushima, which will be released in July.

Audio Video PS5: an AI will adapt the music of the games in real time to maximize immersion
PS5: you will not be able to play with your PS1, PS2 and PS3 games, Sony confirms it ❯

add a comment of PS5: an AI will adapt the music of the games in real time to maximize immersion